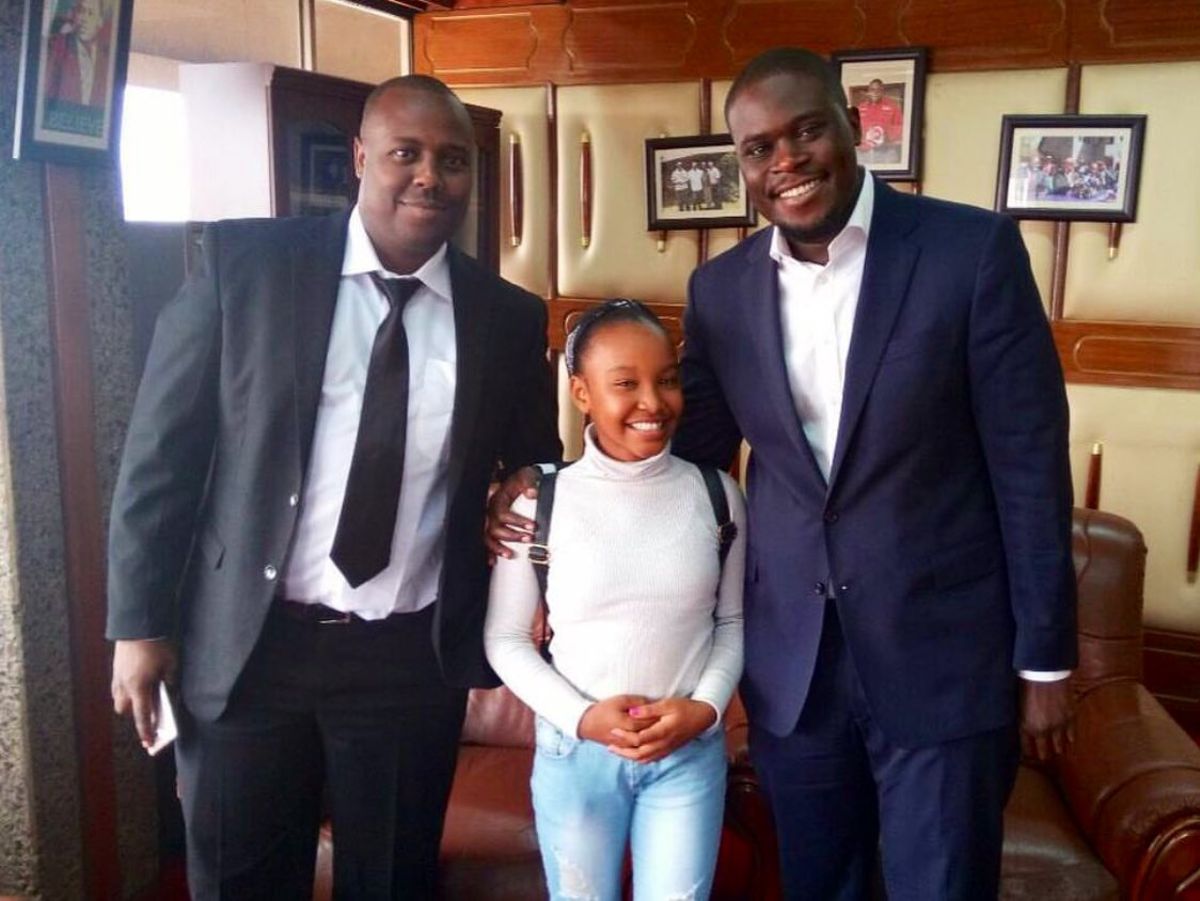 Telling his side of the story on Chipukeezy show wasn’t enough for Wendy Waeni’s former manager Joe Mwangi. He decided to pen down his truth accompanied by screenshots and photos on his Twitter feed.

In his revelations, he has painted the young gymnast to be immoral an in need of guidance and counseling as opposed to financial aid. Check out his complete testimonial below:

1. Alot has been said,lets now concentrate with facts about this whole thing.

2. Has Wendy been recieving what she deserves ?
The answer is YES,am not the one saying it,
Her mother admitted yesterday on @RadioJamboKenya .
So what changed from "We have never recieved a penny for 5yrs" to "Nimekua nikipata kidogo kama elfu ishirini"….
Nonsense . pic.twitter.com/7GPdenKslH

4.
Where did all this start ?
It started in April 16th 2019,
When i took a Tecno smart phone from Wendy & completely denied her access to the phone & internet,that was in Diani .

5.
What made me deny Wendy access to phone & internet ?
Since Dec i had been monitoring her internet activities & on April i felt it has to come to an end .
When we returned to Nairobi from Diani i called her mum for a 4hrs meeting,showed her everything.

6 .
What did i show Mama Wendy ?
And many more that i wont post here for now . pic.twitter.com/Gwfy3EgVIs

7. One of my text to Mama Wendy. pic.twitter.com/N4oaIli7Nj

9. All Mama Wendy Wanted is i give Wendy back the phone,i said NO .

10.
This is Wendy texting me using her mum's phone . pic.twitter.com/3FxN1c8NNo

11 .
When i felt that Mama Wendy is not ready to talk to Wendy what did i do ?
I reached out to Hon Oluoch (Mp Mathare) ,
He has really been supporting Wendy so i felt let me take it there . pic.twitter.com/R1sLaBG0GY

12.
At this time we decided to take the matter to the School Principal & the class teacher ,which we did,
A meeting was held in school,myself,mama wendy,class teacher,principal and two other teachers,it was agreed Wendy to completely stay away from internet . pic.twitter.com/PPWjY03H9r

14.
So where did Wendy spend her midterm break ?
Mama Wendy allowed this kid to visit people that she doesnt even have an idea where they live,i became angry and texted Mama Wendy . pic.twitter.com/bBMedONh6i

15.
During the school meeting Wendy admitted some things that i wont post hear,that happened during the midterm visit
The lady next to Jeff and the next to Wendy are sisters,wendy spent a week at their place,i wont mention what wendy admitted that happened there . pic.twitter.com/5ya6zjRlAv

During the School Meeting, (Mama Wendy present) it was agreed that Wendy to COMPLETELY stay away from those 2 ladies following what she admitted .
Now i understand the lady next to Jeff is the alleged new manager . pic.twitter.com/XfttZAKLlC

17 .
So where did it get here ?
Since April Wendy has been seeing me as a bad cop,simply because i denied her phone & internet access.
That's what lead to all this .

19.
So has Joe been paying for Wendy's fee , pic.twitter.com/0aPdkubZZA

Mama Wendy has even been organising things without my knowledge,then when things go wrong she starts involving me ,
How am i responsible for that..?? pic.twitter.com/YiVRVDxMvF

21 . For now someone help me analyse this,
From we have never recieved a coin to "alikua anapata kidogo" ,

You can spend 15hrs of a day in a bar mis-using your money & out of shame you start sending a minor on TV to mislead everybody . pic.twitter.com/I30MZPCdh5

22 . As a Manager once i hand over Wendy's cash to her mother its not my fucking business to know or care how that money will be used,
How can i be responsible of that ?
Its not my business to know how you will spend the cash,is it..???

23. …..and to you Kenyans,if you still thinks that what Wendy needs right now is financial support then you are not doing her any justice,
What Wendy needs is Guiding And Counselling.

24 .
FACT – Mama Wendy wasnt aware of what Wendy said on Tv , but as a parent she had to clean it up .
3 people coached Wendy without Mama's knowledge.
Let Wendy heal for now,i have been with her long enough and i know she will speak out soon on what happened

25 .
Thursday Last week in school a meeting was held and the Principal placed a strict curfew on Wendy that she shouldnt be seen anywhere close to those 2 sisters,following what Wendy admitted in presence of her Mother,myself,Princi & 2 teachers . pic.twitter.com/kMnVWGaAgT

Check out netizens mixed reactions below;

I see #joemwangi is trying to employ that itumbi design of chatting himself and taking screenshots.

having read the #JoeMwangi thread on the engagements with #wendywaeni, and with facts posted online, I will not trust Wendy just because she is a minor. Minors are being used to ruin people's lives and settle scores. men are in jail, coz of minors' false testimonies.

According to how I know Kenya and Kenyans, #JoeMwangi might be innocent kiasi.

Kenyans tho!! 😂😂 Wendy cannot have lied but #joemwangi is lying? Why, you may ask, and they tell you because she's a kid. 😂😂. How about that!🤔. Just how do people select what to believe and what not to?

#JoeMwangi Should know that he was managing a kid. Not an adult. So he shld not go to the extreme of damaging a kid to clear his name. #EbruChipukeezyShow

#joemwangi was supposed to be wendis manager.
Why couldn't he do his job n manage the brand that is wendy into profit?🤔
This man is not fooling anyone.
Pesa ulikula nanii wacha story mingi! pic.twitter.com/a7m9YPlCqm

Dear DCI, are you arresting this man or should we let Kambas deal with him traditionally #joemwangi @chipukeezyvini #EbruChipukeezyShow @EbruTVKenya

Having listened to the side of #joemwangi .. It appears we were to quick to give judgement. And the real enemy here might be the mum. We know how easily children can be swayed by adults. Especially adults close to them and whom they trust.

This man #JoeMwangi is lying to Kenyans, and I agree he is not a good manager at all… How does he say that he wants to expose a minor?? What kind of a manager does that?
Clear his name at the expense of a MINOR???

Where is this Joe Mwangi? someone tell him we just wanna talk #JoeMwangi #JKLive pic.twitter.com/yCCu7jQKri