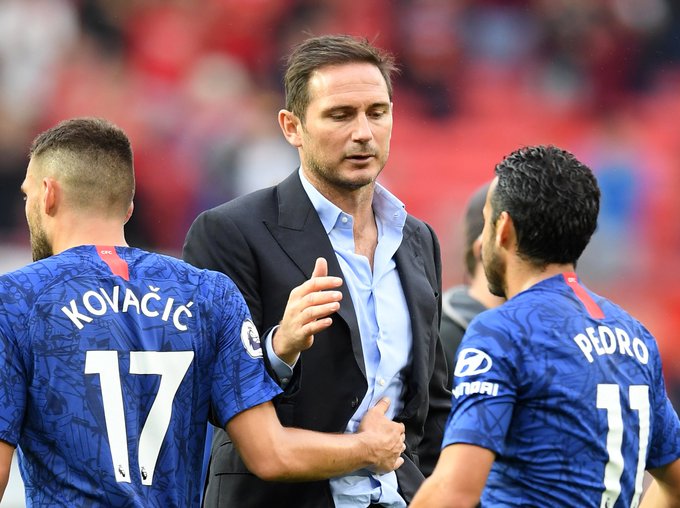 Chelsea suffered the heaviest opening day defeat in history after succumbing to a terrible 4-0 defeat to Manchester United on Sunday at Old Trafford. Perhaps this is not what their new manager Frank Lampard deserved for a start.

Despite making some serious advances during the first-half and even Emerson Palmieri rattling David De Gea’s crossbar, the Blues’ defense was torn into tatters, easily conceding the 4 goals.

Chelsea fans have applauded United’s speed and precision on the counter-attacks, which gave the hosts two goals but have raised serious complaints on their defenders with a section calling them naive.

In a bid to dig out the root cause of their loss, fans launched an online discussion on who to blame in particular. In fact, they have given their plea to Lampard and pointed out various positions that should be worked on.

So lets have a look at these 4 goals closely and isolate the problems.

Goal 1:
– Pedro gives the ball away in midfield
– Azpi slow to react on Rashford's run
– Space opens up in midfield
– Rashford found open

This not a reaction to yesterday’s defeat but I feel Azpilicueta is hugely on the decline & it’s sad to see. A fantastic player for Chelsea winning many trophies but maybe it’s time to introduce Reece James when fit. Experience is vital but I feel Azpi will continue to struggle. pic.twitter.com/77crfhHIU2

Now that I’ve had a proper chance to reflect on yesterdays defeat, here are my views.

• Rudiger needs to come back ASAP.

• Need to work on our sloppiness.

Azpi’s name is all over each goal. The guy has become a liability. I would of preferred Ola Aina

Zouma is just a scapegoat,but what happened to Pedro and azpi before then,azpi is not the same guy I have known for years,he is depleting. Rudiger and zouma will be fine for now,though we need experience center back, we can't buy and Christensen is too soft.

And people thinking that Azpi should be a CB – the moment leading up to Rashford’s second goal summarises why Azpi isn’t even good enough to play CB – slow reactions and shit recovery pace.

Azpi my man, I've huge respect for you but what were you doing here? 🙆‍♂️ pic.twitter.com/48OHYSUlXn

Frank's priority has to be fixing the defence. Zouma & Azpi poor.

• Only Up From Here. Fix Up If You Are Tweeting For The Manager To Be Out. Honestly.

Apart from Pedro, Azpi, Jorginho, you can call this Chelsea side a Proper Young Team with a Proper Young Coach
Top 4 finish with this team will be Chelsea's greatest achievement since 2012 UCL triumph #MUNCHE pic.twitter.com/18tSXMYmNy

@ChelseaFC embarrassing. Just shocking. Zumba or Zouma, Mount, even Azpi was awful. Not good enough. Can't wait for Rudiger, Kanté, Loftus, Odoi to get back. Was so painful to watch. pic.twitter.com/19s7oGIXpT

The Lampard-led team will now face Leicester City on 18 August 2019 at Stamford Bridge in their second Premier League match of the season 2019-20.