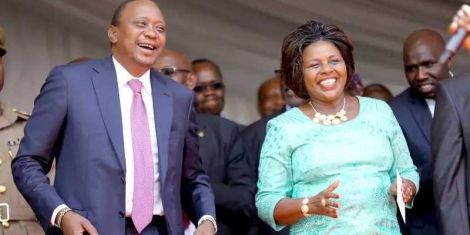 Various leaders converged at All-Saints Cathedral, Nairobi for the memorial service of the late Bomet Governor Joyce Laboso led by Deputy President William Ruto and a number of cabinet secretaries.

President Uhuru Kenyatta was however not present at the occasion that was graced by other governors and politicians.

The Head of State was, on Thursday, chairing the cabinet meeting at State House where he stated the government was working to place measures including policy interventions that would help ease the burden of the cancer disease on Kenyans.

The President led the cabinet in a moment of silence in honor of the late Bomet Governor Dr Joyce Laboso and the late Kibra MP Ken Okoth, both of whom succumbed to cancer recently.

He acknowledged that cancer is fast becoming a crisis that needed urgent action.

“We need to see what more we can do to assist both in prevention but also in the treatment of the disease. And we need to do that as a Government together with the county governments.
“This is an issue that we need to take more seriously and galvanize all of us to come up with a solution both in preventive –which is most important – but also in helping fellow Kenyans to get treatment, and get it early for those already affected by the disease,” the president conveyed.

Also on the agenda during the meeting was Uhuru’s announcement that Kenya had joined the league of oil-exporting countries of the world.

“We are now an oil exporter. Our first deal was concluded this afternoon with 200,000 barrels at a price of Ksh1.2 billion.

“So, I think we have started the journey and it is up to us to ensure that those resources are put to the best use to make our country both prosperous and to ensure we eliminate poverty,” he stated.