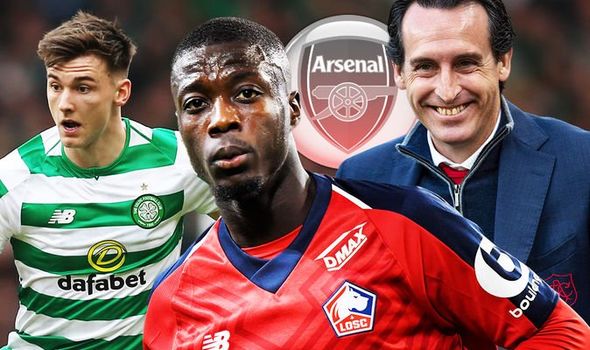 Arsenal is on the verge of completing a sensational €80m Million deal for Lille and Ivory Coast winger Nicholas Pepe. The player is already in London for his medical and will be officially unveiled soon.

Arsenal are on course to confirm the €80m club-record signing of Ivory Coast international Nicolas Pepe from Lille later this week. The 24-year-old winger/forward has arrived in London & will undergo a medical today before signing a five-year contract at the Emirates #AFC #LOSC

The Winger score 22 goals in Ligue 1 last season and was second on the scoring charts. PSG forward Kylian Mbappe was the only player in France who scored more goals than Pepe.

Nicolas Pépé is in London with his agents. He’s having first pictures as new Arsenal player – the deal will be official soon. It’s time to sign his contract… here we go again! ✍🏻🔴⚪️ #AFC #Arsenal #transfers

In more Arsenal news, Club Captain Laurent Koscielny is edging closer to leaving the Emirates. The French defender refused to travel with the team for their Pre-Season tour in a bid to force a move away from the club.

Out of favor center, Shkodran Mustafi is also earmarked as a possible exit this summer. The player has been linked with a move to AS Monaco and was booed in Arsenal’s loss to Lyon in the Emirates Cup last Sunday.

Arsenal technical director Edu met with the Stade Rennes president + the representative of Laurent Koscielny in London yesterday. Talks between #AFC & suitors continue in a bid to resolve Koscielny’s future. The 33yo captain does not anticipate playing for the Gunners again #SRFC

Unai Emery’s team will be in action on Wednesday when they face off with Angers in a pre-season friendly before playing Barcelona on Sunday. They will start their Premier League season on August 11th.