‘Standard Wamechoma Picha’ This what Standard Newspaper have been told after running a fake story ‘revealing’ that President Uhuru Kenyatta snubbed William Ruto at JKIA. 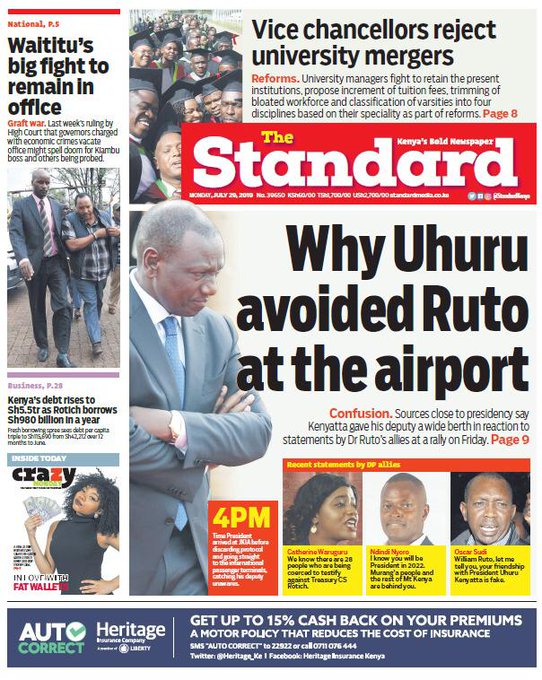 Ruto has refuted claims that he was at the airport in the company of embattled Kiambu governor Ferdinand Waititu on Saturday to welcome President Kenyatta who was jetting into the country from Zambia. It is alleged that Uhuru changed routes to avoid meeting his DP.

I was nowhere near JKIA. I am NOT surprised that some media houses & their owners are this desperate. Tuwasamehe tu!!” Ruto wrote his twitter account.

FAKE NEWS ALERT!!!
I was nowhere near JKIA. I am NOT surprised that some media houses & their owners are this desperate. Tuwasamehe tu!! pic.twitter.com/vVjlLnCCd6

It seems this story has done more damage to the reputation of the paper as Kenyans have joined Ruto in bashing it, claiming that it can only serve one purpose ‘wrapping meat in the butcheries.’

The Standard Newspaper is owned by the Standard Media Group, which also owns KTN. The Moi family is believed to be the biggest shareholder in the company. Ruto’s attack on Standard came on the same day, Senate Majority Leader Kipchumba Murkomen accused Gideon Moi of blocking his interview on KTN.

I am sorry to let you know that my colleague https://t.co/wimoj87AjT has cancelled my appearance at KTN #CheckPoint Tonight. I have always supported media freedom in Kenya. Unfortunately the struggle between media ownership &editorial independence is real….. pic.twitter.com/CIQT29fWRt

But Kenyans have told of the Mois and the company that nothing can raise their profile.

Nothing will raise the political fortunes of Gideon Moi