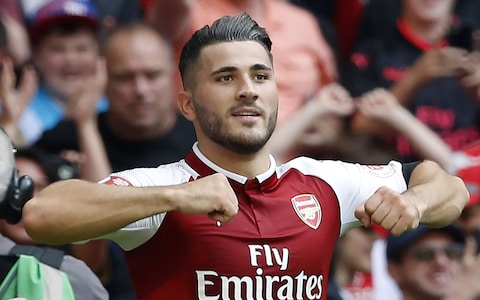 Arsenal fans appear preoccupied with the Thursday incident where Bosnian Sead Kolasinac and Mesut Ozil were attacked by carjackers in Platts Lane, near Golders Green, at about 17:00 BST and this has sparked a captaincy debate.

Kolasinac fought off two knife-wielding thugs after teammate Mesut Ozil was targeted in a suspected carjacking. The Arsenal duo was traveling in Ozil’s Mercedes SUV when the moped bullies appeared.

BREAKING: Mesut Ozil’s car got jumped, Kolasinac jumped out and chased them off 👀 Ozil nowhere to be seen as usual 😂 pic.twitter.com/VlTPwcVg0Y

The Gunners are much aware that the club is in need of a captain after the transfer decision by their skipper Laurent Koscielny. The Frenchman’s future with Arsenal has been in major doubt ever since he refused to travel on the club’s pre-season tour of America.

The 33-year-old’s decision angered Emery, who has insisted that he will only work with players who are ready to be at the club.

And now Arsenal fans are calling for the club to hand the captaincy role to Kolasinac after his bravery act;

Announce Kolasinac as the team Captain 😎

I think Kolasinac is obviously captain material now! On and off the pitch he has the teams back

give kolasinac the captain armband

Oi @Arsenal you better make @seadk6 our captain with immediate effect RIGHT NOW!!! Get you a friend that have your back like kolasinac have ozil's!! #YaGunnersYa

Kolasinac to be named as our Captain.

Today, I give all my respect to Sead Kolasinac. My guy! He fully challenged two armed men for Özil! YOU MAD ?!?!

He was ready to fight him. Now that is the kind of friend you need in your corner.

Captain is not the player that has the most tricks or talent. Captain is the player who stands up for his teammates and will defend the badge until the last second of the game. Sead Kolasinac became a hero today. However, he has always fought hard for @Arsenal. He is my captain! pic.twitter.com/1FNqisD8YA

Make @seadk6 our captain ffs that's what we been lacking heart! That was some brave shit taking on 2 guys with knifes!!! Who does that @seadk6 thats fucking who, every one needs a kolasinac in there squad pic.twitter.com/4n06jFGGjB

Obviously not an Arse fan but if Kolasinac isn’t the AFC captain next year off the back off this then the games gone. Fair play