Dr Ekuru Aukot must seek the hand of President Uhuru Kenyatta and his “Brother” Raila Odinga to succeed in the push for referendum.

The Independent Electoral and Boundaries Commission verified that the Constitutional Amendment Bill fronted by the Thirdway Alliance Kenya Party has met the required threshold for consideration. 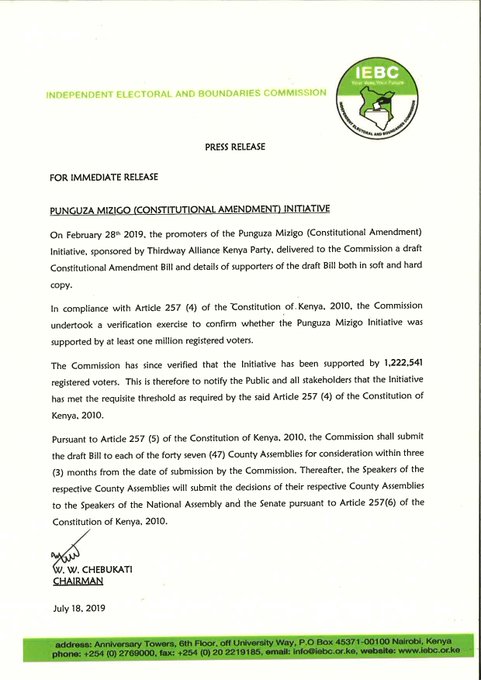 In adherence to the rule of law, the draft will be presented to the 47 county Assemblies for consideration within three months from the date of its submission.

The three (3) months are for the 47 County Assemblies to consider the draft Bill, Pursuant to Article 257 (5) of the Constitution of Kenya, 2010. @citizentvkenya @Tuko_co_ke ^EA

This is where Aukot’s headache starts. The Third Way Alliance Party has zero representation in the county assemblies. For the draft to be approved it requires at least 2/3 of the total number of MCAs per county.

For the record,only President Uhuru Kenyatta who is commanding Jubilee Party and Raila Odinga leading ODM can raise those numbers in the county Assemblies. They two have numbers that can help Ekuru Aukot make history in Kenya.

Apart from receiving a 2/3 support in every county, the Bill needs to sail through in 24 counties before it goes to the next stage which is again an uphill task for Aukot.

If Third Way alliance manages to convince MCAs without Raila or Uhuru’s intervention then the party will have to do it to convince The Members of National Assembly and The Senators.

Again Raila and Uhuru have the majority representation in both houses of National Representation.

But the problem comes in the Laws that Govern Political Parties in Kenya. It is out-rightly wrong to promote the interests of another political party.

CONSIDERING that it is an OFFENSE in the political parties Act to PROMOTE the INTERESTS of another political party, how will Third Way Alliance Party ask other parties to promote its interests by PASSING this Pungusa Misigo Bill. Remember Aukot doesn’t have even a single MCA. 😂

Again in Kenyan politics, everyone wants to be a hero. It will take more than just words for Ekuru Aukot to convince either Raila or Uhuru to buy into his idea.

However, Aukot can pull another miracle and manage to sail through without hanging on Either Raila or Uhuru.

The first miracle was managing to collect over 1 million signatures which ODM did not believe was possible.  Their Secretary General Edwin Sifuna vowed that he would resign if Thirdway Alliance raises over 1 Million signatures.

Edwin Sifuna MUST Keep his word and Resign. 🙄 pic.twitter.com/ForXQ8pvA6

The Punguza Mizigo proposed constitutional amendments, will save Kenyans over Sh3.78 trillion which is higher than the current national annual budget. With this money, we will be able to meet the demands of nurses, teachers and doctors and even create jobs for our growing youth population.

It advocates for the reduction of the number of MPs from the current 416 to 147, caps monthly salaries of elected leaders to a maximum pay of Sh500,000 for the president and Sh300,000 for MPs, as well as increasing counties’ share of national revenue from 15 per cent to at least 35 per cent.