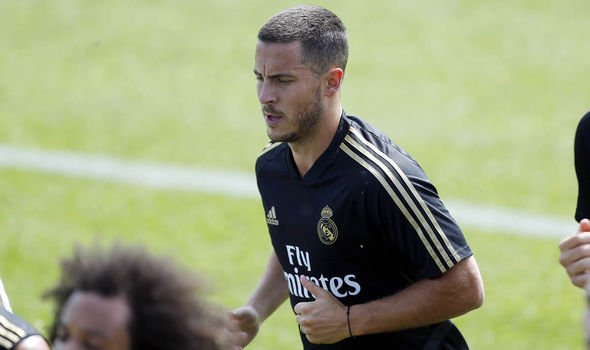 Real Madrid new signing Eden Hazard is back to his normal form. This is after a 35-second video that was taken during his training with teammates at Montreal, Canada.

The short video shows the former Chelsea star looking extremely sharp, challenging and breaking ankles while also scoring goals and setting them up.

Some Highlights of Eden #Hazard's first week at Real Madrid … and this is just the beginning! 😍pic.twitter.com/nhpfTTI3HK

Zidane is in the training camp in Canada with his men preparing for the pre-season matches against Bayern, Arsenal, Atletico and Tottenham. Their first friendly match will be on Sunday 21 July against Bayern Munich before meeting Arsenal and Atletico Madrid on 24th and 27th July respectively.

Hazard is poised to make his Real Madrid debut against Bayern Munich in the International Champions Cup next week.

Madrid fans are counting on Hazard to inspire the team after a dreadful 2018/19 campaign – and the former Premier League star certainly possesses the quality to make a significant impact at the Bernabeu this season.

The 28-year-old joined the Spanish club from Chelsea last month for a fee that could exceed £150 million on a 5-year contract, a deal that could see him until 2024 at Santiago Bernabeu.

Hazard will wear shirt number 23 at Real Madrid with Luka Modric and Mariano Diaz reportedly unwilling to give out their squad numbers 10 and 7 respectively.

READ: Griezmann humiliated in his first training with new teammates