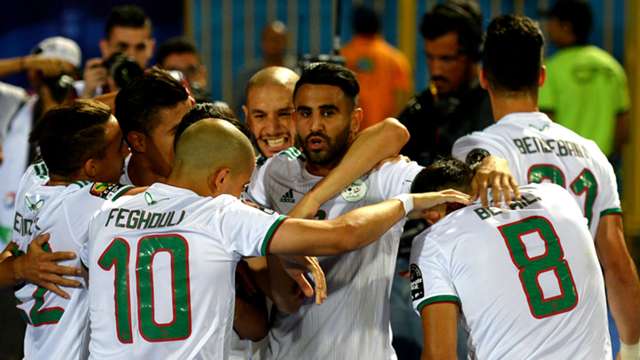 The Ivory Coast will be up against Algeria in what is arguably the toughest match from the African Cup Of Nations quarter-final draw. World Class talents will be on display as two giants of the African game battle it out for a place in the last 4.

The teams last met in the 2015 edition when a Yaya Toure inspired Ivory Coast triumphed 3-1. Wilfred Bony scored a brace that night with the win inspiring the Elephants match on to a second African title.

Some of the names from that winning team will still feature on Thursday. Brace scorer Bony, goalkeeper Sylvain Gbohou, Serge Aurier, Wilfried Kanon, Geoffrey Serey Die and Max Alain Gradel the survivors from the 2015 African Champions. Algeria, on the other hand, has displayed perhaps the best football witnessed in this year’s tournament. The Desert Foxes have won all their matches so far, scoring 9 goals while conceding none.

Led by fleetfooted Manchester City winger Riyad Mahrez, the North Africans are increasingly becoming one of the best to win the 32nd edition of AFCON. Djamel Belmadi’s side is defensively secure and devastating going forward.

Impressively, Algeria has already beaten one of the semi-finalists after they saw off Senegal 1-0 earlier in the Group Stages.

Against the likes of Wilfred Zaha, the aforementioned Bony and Nicholas Pepe(who has yet to convince), Thursday’s represents a sterner test. This Match has all the qualities to be a football treat and we will have all the details straight from Cairo on the Opera News App.