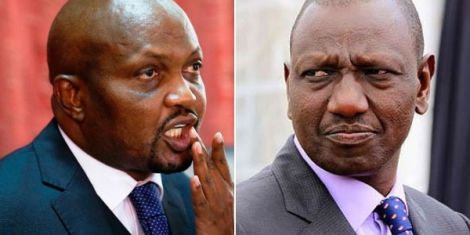 President Uhuru Kenyatta’s succession battle is escalating to worst scenarios with the Directorate of Criminal Investigations (DCI) summoning four Cabinet Secretaries on allegations that linked them to a secret plot to eliminate the Deputy President William Ruto.

The Cabinet Secretaries from Mt. Kenya Region allegedly held a meeting under the basement of one Lamada Hotel where they were plotting to assassinate Ruto.

Now the Gatundu South MP Moses Kuria claims that he is indeed the one who initiated the meeting at La Mada Hotel.

In defense of the Cabinet Secretaries, the vocal MP confirmed that the Css were indeed discussing development agenda for their region as he is the Mt. Kenya development coordinator and that he is ready to attest that before the DCI.

“This whole meeting of Lamada including the choice of Lamada Hotel, I’m the one who initiated it, because I am the coordinator of development in our region,” Kuria claimed.

This whole meeting of Lamada including the choice of Lamada Hotel, I’m the one who initiated it, because I am the coordinator of development in our region – Moses Kuria #AMLiveNTV @debarlinea pic.twitter.com/Tmib9MBZvD

Kuria’s who has announced his plan to vie against the DP in 2o22 goes on to send a piece of advice to Ruto urging him to bring to a halt the personality cult around him.

Trade and Industrialization Cabinet Secretary Peter Munya who was first to complain over the alleged plot, accused Ruto of linking him to the plot without proper investigations.

“We want to confirm we have been having meetings. Indeed, we had a meeting in La Mada and we will continue having meetings because under the Constitution of Kenya, there is freedom of assembly and expression,” Munya.

Such remarks are coming in while the party is facing the greatest rift with some MPs threatening to withdraw their monthly contributions to the party to push for the sacking of Tuju. The MPs are accusing Tuju of plotting to undermine Ruto’s 2022 presidency.