Record African Champions Egypt kicked off their 2019 Africa Cup Of Nations campaign on a winning note. The hosts beat Zimbabwe 1-0 in the opener held at the Cairo International Stadium.

Mahmoud Trezeguet’s superb solo run and finish gave the Pharaoh’s a 1-0 halftime lead. The hosts had been threatening to get on the score sheet right from the kick-off but for some wayward finishing and excellent goalkeeping from Zimbabwe.

The first ten minutes had all the indications of the match turning into a rout as the Egyptians swarmed the Zimbabwe goalmouth led by the fleet-footed Liverpool forward Mohamed Salah. Zimbabwe, however, got a hold of the game midway through the first half and should have been ahead through Khama Billiat but his shot excellently kept out by the goalkeeper. 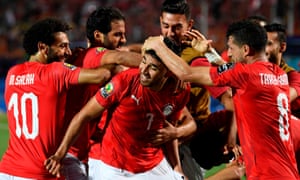 Trezeguet, picking the ball from 30 yards out in the 41st minuted, drove and fired a shot to send the North African nation into delirium.

The second half was a balanced affair but Liverpool forward Mohamed Salah was guilty of missing a couple of good chances to put the game beyond Zimbabwe’s reach.

The South African’s, led by the very active and pacy  Kaizer Chiefs forward Khama Billiat did have moments of their own but could not find the final ball all night. Egypt held on to win and start their pursuit of an 8th African title with a precious 3 points and a clean sheet.

The Pharaoh’s could book a next round slot with a win against Wednesday’s opponents DRC Congo in their second group match. Zimbabwe, on the other hand, will face off with Uganda on the same day.