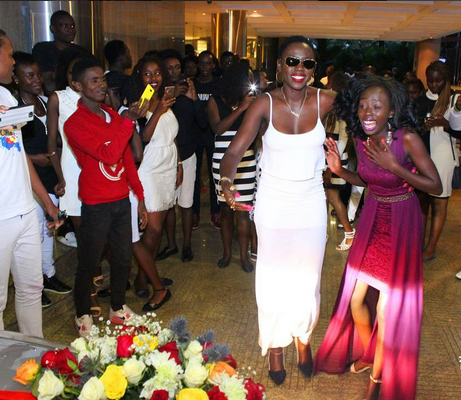 Akothee’s firstborn daughter Vesha turned 22 years old yesterday and got the surprise of a lifetime.

While her other birthdays have been celebrated in style at high-end venues with lavish gifts such as cars, this one seemed to be chilled and laid back. But then again, it’s only just Wednesday, the weekend is the true determinant.

On this day a queen was born 😍😍😍 happy birthday to me. #madamdirector @akotheekenya Makeup by @make_upbyrose

The beauty’s reaction to the surprise she got proves that Akothee has raised them right, that money and luxurious gifts aren’t all there is to life. Love and family are the ultimate gifts.

In a video posted on social media, madam director as they like to call her got surprised by her biological father singing her happy birthday. You can see the sheer joy in her eyes at seeing her father that she jumped on him and he twirled her around like a little baby.

While one hand carried Vesha, the other one carried a gift that hasn’t been revealed yet. As she screamed at the wonderful surprise, she was overcome with love and happiness that she cried as well.

She posted the video with a cute caption thanking her dad for the surprise.

Thank you so much daddy for the surprise #birthdaymonth

Akothee also posted the video o her profile thanking the man she refers to as her childhood best friend. She acknowledges that you can’t really keep children away from their father, despite whatever indifference you have.

Just deny your children the right to see or talk to their biological father , they will one day use it against you , ngoja tu , they dont give a fuck about our indifference 🤣😂🤣🤣🤣🤣🤣 We ran our family off social media and you think you know us 🤣😂, leave us alone ,daddy shows up at the hostel, what a surprise , happy birthday daddy’s daughter , 😭😭😭😭😭😭😭😭😭😭 thanks man Jaro, my best friend since child hood , I am happy for you too, hope your wife and children are doing great , lets kick that family safari katasi @akotheesafaris , next time you attack my Jared and his family on social media I will come for yours ❤ 💋see @rue.baby @veshashaillan

This post comes just a few days after Akothee had posted a throwback photo of the two when they were hot for each other and madly in love. In the post, she confessed that  Jared was the one one who taught her how to kiss and inevitably took her virginity.

She poured praises on the man that he was and that he is today, proving that the two patched up their differences and respect their journey together. Something many women can learn from.

AkotheeExchallenge lets go 🤣😂😂 See my first love 😍😍, the man who broke my virginity , the father of my 3 beautiful daughters @veshashaillan @rue.baby @fancy_makadia , yes the man who taught me that people kiss,🤣😂 I always ran away with my mouth, I was wondering why I should eat somebody’s siliva🤣😂, apart from us breaking up , this guy had my back, we went through shit together , even when his parents said no to me , he stood by me, we were thrown out together to go back in the village , he was still a student, so when his parents chased me away, he said he is coming with me , so we Were deported from awendo to the village KANGA , where they had built us a house , he was still a student at moi University , so when schools opened he gave me 3000 ksh from his porket money , to survive with our 3 children , so I looked at this money and said, if I shop with this money , I dint know when I will set my eyes on the next shilling🤔so, I decided to put up a business , I went to kisii daraja mbilli and bought stock of omena, tomatoes and cabbages , I started a grocery in our local market Kanga🤣😂, my mum was always ashamed when she saw her learned , bright intelligent daughter selling omena yet we came from a good family, but I had messed up and grew wings I could not fit in my mothers house anymore with a hand full of children ,I grew wings I had to fly , RESPECT MAN JARO , my grocery grew and I rented a shop , then I expanded my business into selling cloths , when I was stable small , I went back to school because this was my mothers dream , Respect my own Jared you be my MCM , most of you could be wondering what he does for a living well , He has masters degree a senior accountant with a very stable family and 2 kids plus mine 5 one word for jakamagambonani 💪💪💪💪💪

Back to the surprise from their father, the highlight of the video that has made many netizens crack up was Akothee’s other daughter Rue’s reaction to the surprise. Instead of being happy for her sister, the model couldn’t hold back her disappointment at their father.

While Vesha was being spun around, Rue stood plastered on the floor unable to hide her anger. She became very emotional that her father had taken time to surprise Vesha but never showed up for her birthday. She even storms off and locks herself in another room to cry.

Her father was eventually able to talk her down and get her to open the door and talk to him. She refers to herself as his favorite on the video. Netizens are asking Akothee and her family to start a reality show.