In a post which has been making rounds in social media, Ksh. 1000 note has already been counterfeited. 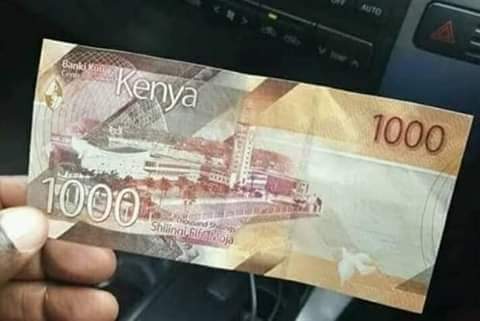 CBK Governor Patrick Njoroge said the new notes have a unique theme and security features and will have images various images—including the iconic KICC, the big five wildlife and will be easy to use by the visually impaired.

Njoroge said CBK is increasingly concerned by the emergence of counterfeits which jeopardize proper transactions and the conduct of commerce in Kenya’s currency.

But his security features have been cracked by the cartels who have successfully minted the new notes which are seemingly in circulation.

'Wash wash' seem to be ahead of Kenyans. They have started printing fake New notes yet some people have not even touched the new bills, very dangerous. pic.twitter.com/I9oY2MbKI4

So the "conmen" are already out there with the fake Ksh 1000 note? Let's be keen with the manual @CBKKenya gave on the security features of the new generation notes. pic.twitter.com/SIUaW8T50z

But CBK issued the full statement on how to verify the new currency which most Kenyans have not yet familiarized themselves with them.

But CBK is more likely to engage the citizens in awareness campaign in order to help them not fall victims of being used to rogue cartels to exchange their fake currencies.