Sudi through his Facebook account maintained that he will never think of supporting Buzeki in the near future as he had always do alleging that the businessman has proved that he has no agenda for residents of Uasin Gishu County other than being a crook ‘businessman’.

He also challenged Buzeki to explain the source of his wealth and business empires saying that Buzeki had conned many individuals and business partners using the Buzeki brand.

“I want to ask Buzeki three questions and I urge him to be honest and tell us the truth; How did he start his business empire? How many Kalenjins has he conned using the brand Buzeki? How many individuals does he owe?” posed Sudi.

Sudi questioned Buzeki’s capability to run the county’s funds maintaining that the businessman had been promising his lenders to settle the alleged 8billion debt he owes them once he takes over as the Uasin Gishu next governor.

“Currently, Buzeki is telling his lenders that he will sort them out the debts he owes them when he becomes Governor of Uasin Gishu County. As we know Uasin Gishu County receives about 4B budgetary allocations for development expenditure for every financial year but as things stand, Buzeki owes his lenders about 8B. Can people of Uasin Gishu trust such a swindler? Hell No!” asked Sonko.

He urged Buzeki to sort out his debt problems first before involving himself in the county politics. Sudi observed that Buzeki has no track record in Uasin Gishu County putting him up to task to come clean on these grave concerns

The vocal legislature also accused Buzeki of trying to divide the communities living in Uasin Gishu singling out the Keiyo and Nandi sub tribes saying that the businessman will not succeed in sabotaging the communities’ unity.

“Our community will never be divided along sub tribes we will never allow self-centered leaders to take us that route. We will remain united and no one will make us lose focus.”  he said

Earlier on, Sui had come under heavy criticism over his remarks insinuating that Buzeki will not be allowed to vie for Uasin Gishu governorship in 2022. In a two-minute video clip which has gone viral on the social media, the outspoken MP claimed that Rift Valley rebels, singling out Buzeki, were being used to derail Deputy President William Ruto’s 2022 presidential bid. 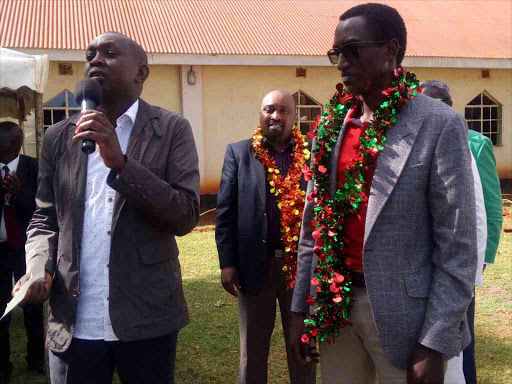 Sudi while Speaking on Saturday in Kuinet, Soy Sub-County, during the burial of Governor Jackson Mandago’s brother Johana Kinyor arap Kirwa, Sudi observed that Buzeki stood a good chance of succeeding Mandago in 2022 at first before shifting to lame CCM party.

His bid for Uasin Gishu’s governorship position, however, received a major boost a week ago after a section of Keiyo council of Elders endorsed his candidature under CCM at the same time installing him as a Keiyo spokesman after the death of former minister Nicholas Biwott.