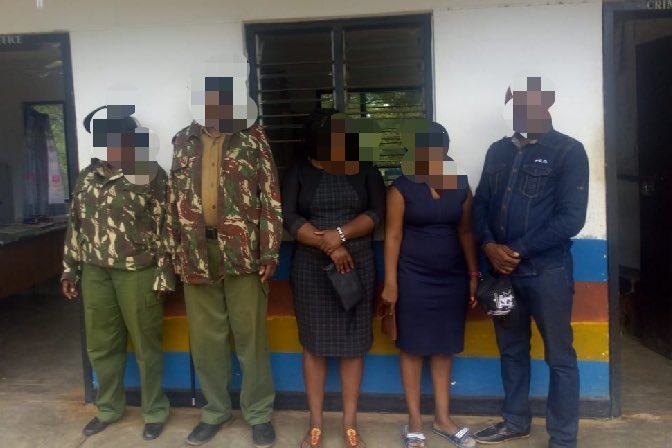 Officers drawn from the Directorate of Criminal Investigations Thursday arrested police officers after they were found extorting money from motorists.

The cops were arrested as they provided cover and protection for a group of civilians who masqueraded as National Environment Management Authority (NEMA) staffers.

Upon interrogation, the detectives were convinced the three people identified as Purity Mumbi Njagi, Grace Wambui Ndung’u and Duncan Njogu Mukono were actually a group of extortionists.

Neither of them had official staff identification documents on them at the time of the arrest.

The two are due to appear in Court Friday to face criminal charges of obtaining money through false pretence.

The Kwale County NEMA office would later confirm to the sleuths that the three officers were not their staffers.

The trio had received money from a couple of motorists plying the Lunga-Lunga Likoni road, with Njogu having received Ksh25,000 through mobile money transfer.

FIVE suspects among them two @APSKenya officers were today arrested within Lunga Lunga Township for harassing and Extorting money from bus/people who had failed #NEMA requirements. The officers were masquerading as security for the FOUR civilians personating @NemaKenya officers. pic.twitter.com/jkKryZqg5a

During the ambush, one suspect managed to escape. However, detectives have laid dragnets and are hoping to track him down before Court appearance Friday.

In April, detectives arrested police officers in Kamukunji after reports of harassment became widespread in the area.

The officers identified as Constables Oliver Tambo Mayabi, Kelvin Andaje and Dancun Wasike were arrested in the swoop where swords, handcuffs and vehicle number plates were confiscated from them.

During the same time, a police officer identified as Steve Omondi was arrested after he was found extorting money from motorists.