It has not been the same business for the Rift Valley and Mt. Kenya leaders since the famous handshake between president Uhuru Kenyatta and his brother Raila Odinga.

Leaders from both the Rift Valley and Mt Kenya region are now crying foul over the truce between the two leaders alleging that their regions have been marginalized from mega development projects as it was previously the norm.

Since the handshake, Raila’s Nyanza Backyard has so far got an estimated 10 billion shillings for development projects in just one year.

However, this has not been the same case with the Central and Rift Valley areas.

Moiben MP Silas Tiren says Jubilee administration has neglected the region which voted for president Uhuru to the last man, even though they are the country’s food basket.

“It seems the President has been avoiding the region for fear of a backlash from residents over unfulfilled pre-election pledges, including better pricing of maize and whether he still supports the DP’s presidential bid,” says a local political commentator.

During Uhuru maiden visit to Kisumu and Siaya, President Kenyatta delivered a bag of goodies to the region starting with the launch of the Ksh.655.9million-Ahero-interchange.

The rehabilitation of the Kisumu-Kakamega road that had stalled is also ongoing with the Kenya National Highways Authority injecting Ksh.4.5billion into the project.

Residents of Siaya will also be beneficiaries of this handshake, with the government through partnerships with the African Development Bank, sinking Ksh.2.1billion to provide water even in Bondo.

The project is expected to benefit over 190,000 households. A similar project to be undertaken in Phase Two, will include Ugunja Sub County as well as Sega and Ukwala in Ugenya at a cost of Ksh.1.6 billion.

The State has also prioritised eradicating the water hyacinth menace on Lake Victoria.

The leaders have taken an issue with Interior CS Fred Matiangi who is tasked with supervising and coordinating all government projects, saying he has never set foot in their regions to oversee or supervise ongoing projects by the government. On the other hand, Matiang’i has made frequent visits to the opposition zone and initiated a number of projects.

“It is like all arms of government are fighting the Rift Valley. At this rate, we might take drastic steps and declare our stand. Mega projects in the region should start, including the Aror and Kimwarer Dam, even as the investigations continue,” says Keiyo South MP Daniel Rono. 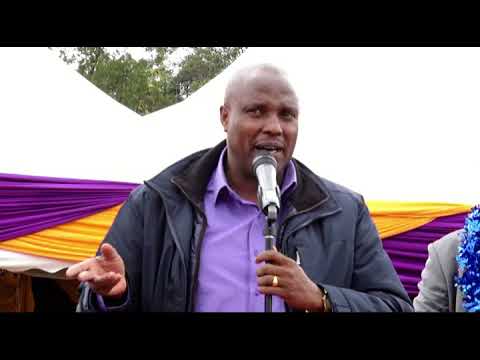 “Sadly, there are mega infrastructure projects being implemented in Kisumu and the larger Nyanza region whose residents did not vote for Jubilee in the last two elections,” claimed Bomet Senator Christopher Langat.

Central Kenya leaders are singing the same tune and MP Kanini Kega says the president was supposed to visit his constituency to preside over a number of development projects only for the visit to be cancelled last minute.