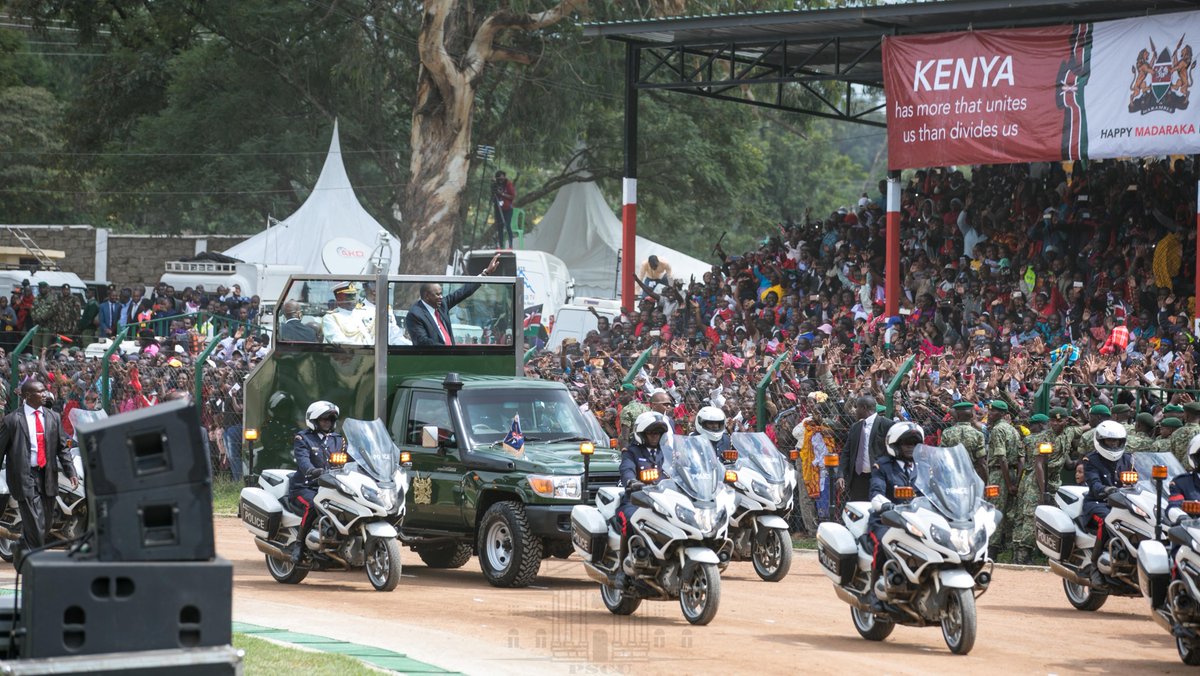 President Uhuru Kenyatta on Saturday June 1, 2019 arrived at Narok Stadium to lead the Nation in celebrating the 56th Madaraka Day. 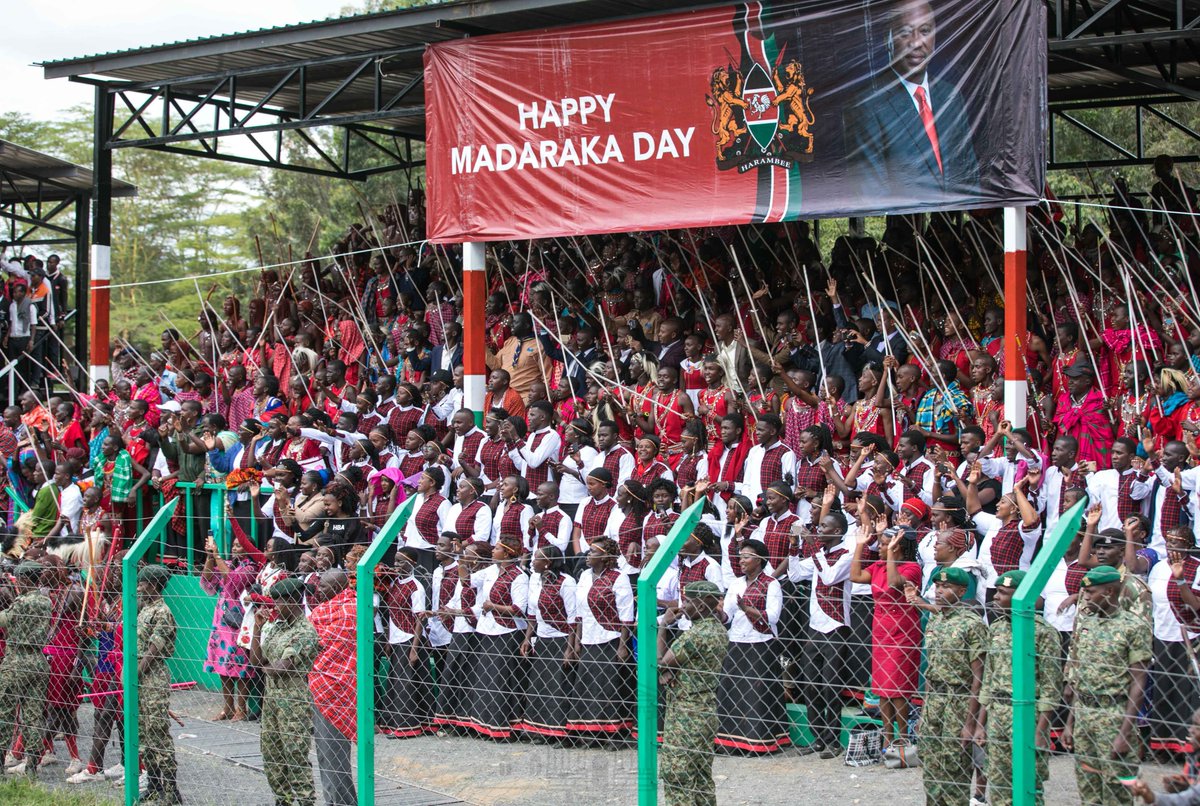 Starting off his speech, President Kenyatta started by explaining what the day means to Kenyans. 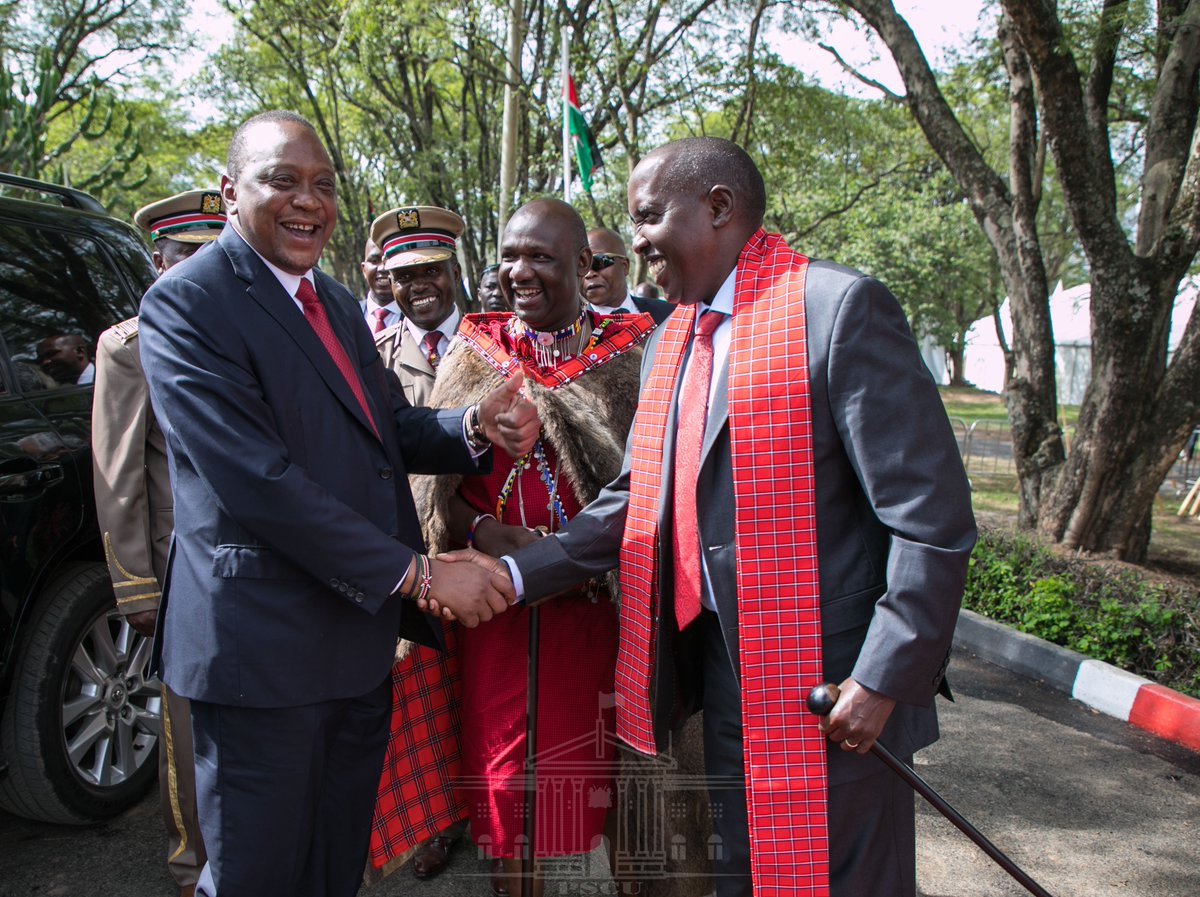 “We come together to commemorate Madaraka Day, A day set aside in our National Calendar to reflect on and celebrate our realization of self-rule after a long struggle against Colonialism.”

The head of state said Some of those who struggled for Kenya’s liberty “are here with us today”.

Some of those who struggled for our liberty are here with us today. We Salute You. All those who fought for our liberation gave something of themselves; some gave all, even their lives ~President Kenyatta #MadarakaDay #tusongembelepamoja

He further honoured and thanked them for their sacrifice, for the immense hope that fired them on, and for their refusal to ever give tyranny a permanent foothold in our country.

He said his Administration made the solemn decision to rotate the hosting of national celebration in order to strengthen Kenya’s nationhood.

My Administration made the solemn decision to rotate the hosting of national celebration in order to strengthen our nationhood. So far Nakuru, Nyeri, Machakos, Meru and Kakamega have hosted our national celebrations ~President Kenyatta #MadarakaDay #tusongembelepamoja pic.twitter.com/3PXvQYloBe

He noted that Once Kenya’s Head of State was a Queen in a foreign land, and the head of government was a direct appointee of the Queen. President Kenyatta cited that they were both answerable to none of us, but now, he is able to answer to Kenyans’ vote, and to the Constitution they chose freely.

Once our Head of State was a Queen in a foreign land, and the head of government was a direct appointee of the Queen. They were both answerable to none of us, but today, I answer to your vote, and to the Constitution you chose freely ~President Kenyatta #MadarakaDay

“We have come far as a Nation since the Crown caved in to our clamour for self-determination. We have achieved a lot, but it has also been a tough journey.Today, Kenya is a country of consequence. We anchor the fragile peace and security in our region. We are a generous country that works hard to build peace among our neighbours.Our economy is the largest and most diverse in the region, reflecting the hard work, strength of character and innovative spirit of our people.Our emerging technology companies attract more investment than any other country in Africa, evidence that the world recognizes the skills and ingenuity of our youth.Kenyans in the diaspora, our greatest export, continue to shutter barriers, joining ranks of corporate executives in world capitals.Our athletes are among the greatest the world has ever seen. Our actors and filmmakers are taking the global stage by storm as the Digital Revolution continues to transform the way the world consumes entertainment.We are exhibiting greatness, thus reflecting our talent, ambition, and willingness to compete with the best.We have hosted millions of people who travel many miles to come and visit our parks and make new friends, reflecting our careful tending of our environment.We have also made our name as the destination of choice for International Conferences and Business “Safari” Tourism.We are taking better care of the liberty our forefathers handed to us. Indeed, we can all be immensely proud that we are a country of laws, whose Constitution has brought Government closer to the people through devolution.Our government is accountable to the people; it listens to them; it is subjected to their will; and it is getting better every day at delivering services and making life better for all citizens

We are growing beyond traditional strongholds such as Agriculture, Tourism, Logistics, Construction and Manufacturing into Technology, Financial services, Horticulture and Floriculture.”

“I can report that last year, our national cake expanded by 6.3%, one of the highest growth rates in the world, and, in consequence, over 800,000 new jobs were created, especially in the informal sector.This is the outcome of the strong reform agenda my Administration has embraced over the last six years to boost investment and create jobs .We are, indeed, one of the global leaders in adopting international best practices in business regulation, property registration and protection of investments .As a result, foreign direct investment increased from Ksh.35 Billion in 2013 to Ksh.200 Billion in 2017.We, however, have much further to go. Too many Kenyans are still struggling to make ends meet. There are not enough decent jobs for the many ambitious and learned youth graduating from our learning institutions every year.”

I know and appreciate the pressure so many of you are under. The desperate phone calls and text messages that come in from near and distant friends and family appealing for help ~President Kenyatta #MadarakaDay #tusongembelepamoja

“The Housing Fund is the second entity through which the delivery of the Affordable Housing Programme shall be supported.The creation of the Fund was informed by the need to bridge the gap between the have and the have not’s, by creating a framework through which the traditionally unbanked can access financing towards home-ownership.Unfortunately the implementation of the Housing Fund Levy as a mandatory contribution for both employees and employers has at every turn been fought with legal hurdles and obstacles.”