President Uhuru Kenyatta and his Deputy William Ruto are playing a tit for tat game, “Hit me, i hit you right back.”

Just the other day during the National Prayer Breakfast meeting both leaders attacked each other.

“Let us put into practice what we preach. We love making commitments but let us stop talking about doing it but let us actually do it,” said the President.

DP William Ruto, on the other hand, made a speech that many suspect was directed at the President.

Ruto started by saying that when President Jomo Kenyatta died, he was in the field looking after cattle and that when the news broke, he ran home.

Well, I think Ruto was trying to tell Uhuru Kenyatta that when his father died, he was just a village boy taking care of cattle while Uhuru was the President’s son.

With this, the DP was trying to tell Uhuru that he has risen from strength to strength despite not coming from a rich family.

Ruto seemed to be telling Kenyatta that although he is not part of a dynasty, he has made it to the top.

This is a clear message that the battle for the leadership of this country will be between the dynasties and hustlers. 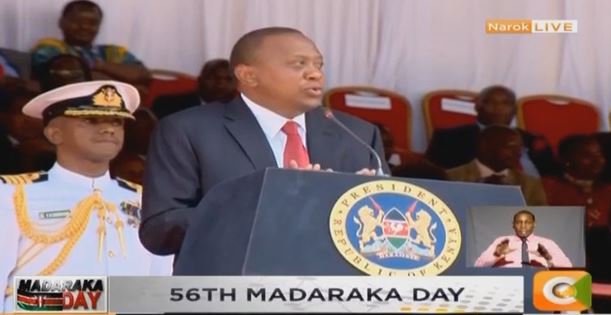 But President Uhuru Kenyatta has also humiliated his Deputy at the National Madaraka Day celebration.

President Uhuru Kenyatta told off the Deputy President William Ruto for early campaigns in the country.

We get angry as we struggle and then read in the newspapers stories about the next General –Election days after the previous one or corruption and abuse of office, knowing that the money stolen comes from our taxes ~President Kenyatta #MadarakaDay #tusongembelepamoja

President Uhuru Kenyatta has also condemned the politics of name calling in the country which his deputy has been using to humiliate Hon Raila Odinga.

We can at times feel like despairing when the good news of our country’s progress comes a distant third to bad news, and never-ending politicking and name calling ~President Kenyatta #MadarakaDay #tusongembelepamoja

President Uhuru has urged the leaders to live the dream of the fore-fathers by matching forward as one.

We are on a consistent match forward and Kenya is transforming into the nation that our forefathers prayed and fought for. Periods of great change are not easy, they are like a birth ~President Kenyatta #MadarakaDay #tusongembelepamoja

He has also acknowledged the pain in the path matching forward.

There is pain and struggle that gets stronger just before a new child is born, with all human possibilities available to it. We are in such a moment ~President Kenyatta #MadarakaDay #tusongembelepamoja

But the President has expressed confident in working hard to ensure the value of the nation are uphold and achieving the goals of the state.

I remain confident that working hard for what we know to be right, and with all our leaders across the spectrum of society pushing in the same direction, we shall get there. We must get there, and Plenty Will be Found within our Borders ~President Kenyatta #MadarakaDay