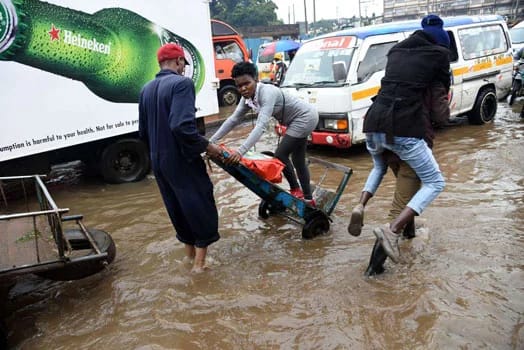 The rainy season has been welcomed by many Nairobi residents following the harsh sunny weather that was experienced in the months of January to March.

However, to some city dwellers the rains have been a ‘curse’.

Residents of Tassia estate have been forced to learn how to manoeuvre through muddy puddles following the recent rains in the city.

On top of that the residents also have to contend with free flowing burst sewer lines while most of the drainage system plagued with a mountain of trash.

Angela Ngomi goes about her business selling tomatoes at the muddy road side. The shiny red fruits give a sharp contrast to its surrounding environment.

“Unfortunately the rains bring our estate to shame. The roads have become impassable, sewer water flows freely with most of the drainage system not doing much to help the situation. To reach my stall one has to be ready to walk through mud,” she laments.

Business is never as usual whenever it rains.

Samwel Kariuki, who has lived in the estate for more than five years, says that they have now become accustomed to the situation.

“Some places are even flooded, and we are afraid of water-borne diseases. The main entrance to Tassia using Outering road is a total disaster. Most of the small scale traders have now been forced to pitch tent on top of open drainage systems,” he says.

Other areas that experience major flooding leading to impassable roads include, Kware, Pipeline and Fedha estates.