Radio Host Massawe Japanni has reportedly been involved in an accident on Wednesday after a matatu(Nissan X-trail) rammed into her car. Fortunately she escaped unhurt. The incident occurred at Nyayo area.

According to a report by Radio Jambo where she works, the accident occurred at Nyayo area in Nairobi.https://t.co/DHcF8rJPzv

According to her station where she works, Radio Jambo, her rare windscreen was badly damaged. The rear lights of the back left of her car were also damaged when the matatu from Orokise Sacco hit her vehicle from behind. 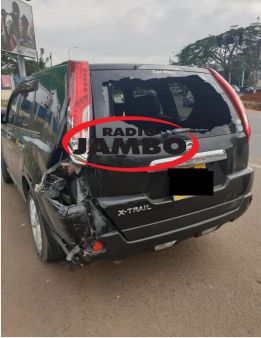 The presenter was reportedly headed to work when the accident happened forcing Radio Jambo to apologise to the fans of Bustani la Massawe, her show at the station, that she would not make it.

“Niko salama lakini bado nimeshtuka. (I am okay but still shocked)” she stated.The mother of three immediately reported the matter at Industrial are police station.

In other accident news, Ugandan High Commissioner to Kenya Phibby Otaala has been involved in a grisly road accident at Kimwanga area along the Eldoret-Malaba Highway.

Otaala was later rushed to Life Care Hospital in Bungoma town in critical condition after the Thursday morning accident.