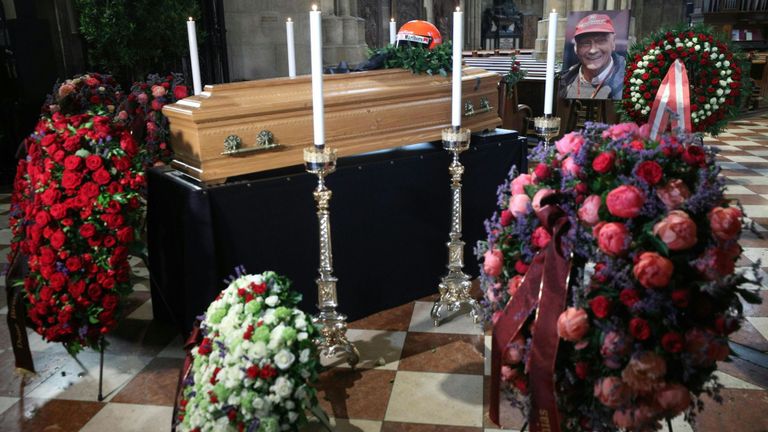 Thousands of people thronged a Vienna cathedral Wednesday to mourn Formula One legend and Austrian national hero three-time Formula One world champion Niki Lauda, who won two of his titles after a horrific crash that left him with serious burns at a ceremony attended by a host of F1 stars including world champion Lewis Hamilton.

Lauda’s casket arrived at St Stephen’s Cathedral in Vienna’s historic centre accompanied by a police motorcade and was carried inside by pallbearers followed by his family as bells rang out as thousands gathered in pouring rain outside.

The three-time FI world champion, who came back from a horrific crash and founded several airlines, died on May 20 at the age of 70.

Inside the cathedral, Lauda’s wife Birgit accompanied by two of his sons placed his helmet on top of the closed brown casket, placed in front of flower wreaths and a portrait of the Austrian, sporting his signature cap, which hid scars from the 1976 crash.

Mourners filed past the casket to bid a final farewell, before a public mass and a private funeral.

It is the first time a sports star has received such an honour at the cathedral, a distinction previously accorded only to prominent personalities such the archbishop of Vienna, Cardinal Franz Koenig, and the former crown prince of the Austrian-Hungarian empire, Otto von Habsburg.

Austrian media have reported Hamilton will attend the mass, together with other Formula One heavyweights such as German driver Sebastian Vettel and Mercedes chief Toto Wolff, to mourn Lauda, who won the drivers’ world championship in 1975 and 1977 with Ferrari and in 1984 with McLaren.

Thousands of people, some sporting Ferrari caps, had gathered outside the Gothic Roman Catholic cathedral despite the downpour, with the queue snaking into nearby streets.

Roland, a 41-year-old technician from Vienna, told media: “Even though he faced very difficult circumstances, he never complained. He is an example for Austria.”

Another Vienna resident, retiree Suzanne Scheffler, said she came to pay her respects, having flown with Lauda’s first airline, Lauda Air, at least 10 times, including twice in the cockpit with him and had seen him in Vienna several times. 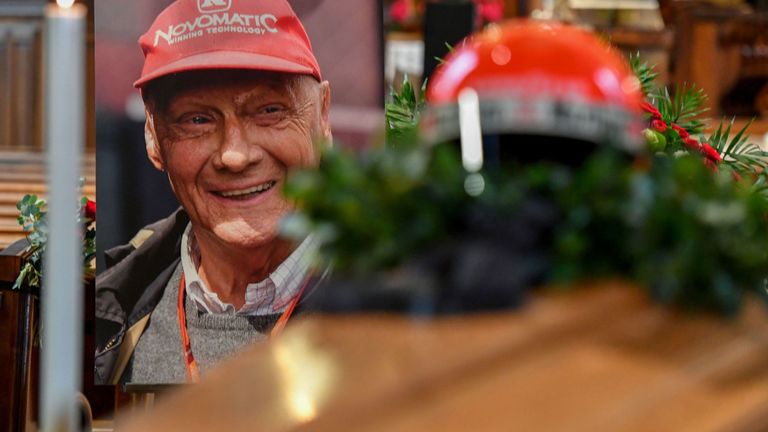 “He was always friendly. It is normal to give him final respects. He was great. It is said he was stingy, but I know he silently donated a lot,” she said.

Even after retiring as a race driver, Lauda remained a fixture on the circuit. Most recently, as non-executive chairman at Mercedes F1 since 2012, he was instrumental in bringing in Hamilton, sparking a run of success for the team.

The Briton won the Monaco Grand Prix Sunday, which he described as the “hardest race I think I’ve ever had”.

That was for you, Niki. Your fighting spirit was right there with me every step of the way. I know you are looking down and taking your hat off to us. I miss you, we truly miss you and I hope we did you proud today, legend. pic.twitter.com/gwNJvFzY8C

“That was for you, Niki. Your fighting spirit was right there with me every step of the way. I know you are looking down and taking your hat off to us. I miss you, we truly miss you and I hope we did you proud today, legend,” Hamilton posted on Twitter after the race.

In all, some 300 VIP guests are expected to attend the mass Wednesday, with 800 further seats and 3,000 standing places open to the general public.

Niki will always be remembered as an @F1 icon and as the Chairman of our team.

But we’ll also remember Niki Lauda the man. This is the story of our Niki. Our team-mate. Our dear friend.

Former F1 drivers Gerhard Berger of Austria and France’s Alain Prost are expected to speak, as is Austrian President Alexander Van der Bellen and former California governor and actor Arnold Schwarzenegger, who was born in Austria.

During the mass, songs, reportedly Lauda’s favourites, including “Amazing Grace”, “Fast Car” by Tracy Chapman, John Lennon’s “Imagine” and “Hero” by Family Of The Year will be played.

Lauda died at the University Hospital Zurich in Switzerland, nine months after he underwent a lung transplant.

He had struggled with health issues since miraculously surviving the 1976 crash that saw his car engulfed in flames at the Nuerburgring in Germany. Lauda also underwent kidney transplants.

One of the kidneys was donated by his last wife. Lauda married the former flight attendant in 2008 and they had twins, a boy and a girl, in 2009.
Lauda also has three other sons from previous relationships.

Besides racing, Lauda’s second passion was aviation. He founded and then sold several airlines with his latest, Laudamotion, going to Ryanair in 2018.

It is not clear where Lauda will be laid to rest. The family reportedly has turned down an offer by the city of Vienna to receive a “grave of honour” in the city’s vast Central Cemetery.

"The description of hero, and legend, was never more deserved."