‘Our country seems to be in a free fall, at the behest of robber barons that have invaded Government.’ This is an excerpt from the high hitting Statement read by ANC Leader Musalia Mudavadi.

Mudavadi is not happy with how the country is being run especially the runaway public debt, which is currently at 6 trillion and the government is applying for more loans from the World Bank.

State of the Kenyan Nation Time to face the facts pic.twitter.com/psf3LNJLDt

At a time when the country is divided between Tanga Tanga and Kieleweke teams where politicians are literally fighting over the cake as Kenyans wallow in high taxation, corruption and a huge public debt, Mudavadi has come out as the only politician with the interest of Kenyans at heart.

State of the Kenyan Nation: Time to face the facts pic.twitter.com/euzy7Ym6Ql

The former Deputy Prime Minister wants President Uhuru Kenyatta to address the issue of county’s debt in his speech during the 56th Madaraka Day celebrations which will be held in Narok county.

But this is not the first time that Mudavadi has displayed his leadership qualities. 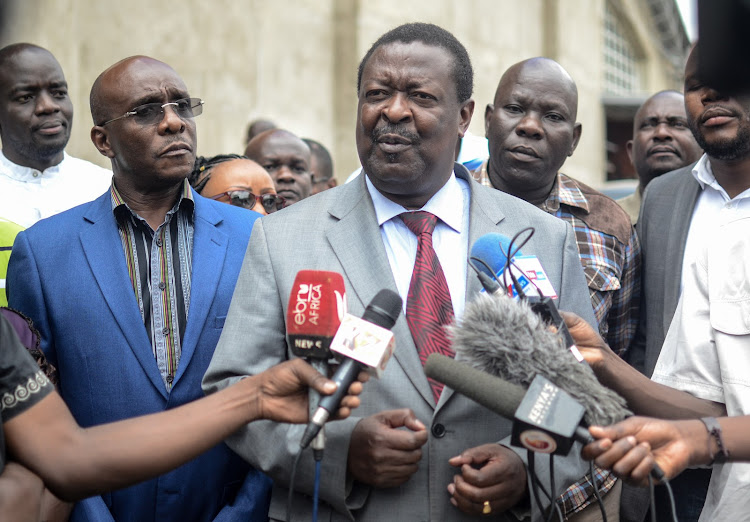 From the moment he was elected unopposed as Sabatia MP in 1989 following the death of his father, Wycliffe Musalia Mudavadi has cultivated the air of a calm, measured and cultured politician. A gentleman, so to speak, like Mwai Kibaki.

In 2012, during the burial of former Cabinet Minister John Michuki, Musalia let on that at the height of the 2007-8 post-election violence when the Kofi Annan peace talks were deadlocked, Michuki invited him for dinner and said, “I am speaking to you as your father and elder. Do not allow those talks to collapse…”

Even President Uhuru Kenyatta knows the leadership qualities of the former Vice President. Prior to the 2013 elections, Uhuru had signed an MoU with that would have made Mudavadi president, only to change his mind the next day. We all know what happened thereafter.

Mudavadi is also credited with creating the National Super Alliance which lost in the 2017 elections. He shelved his own Presidential ambitions, knowing that the bigger goal was to dislodge the scandalous Jubilee government from.

Most Kenyans agree he would make a fairly decent president. But he has always been faulted for being too pliant, for lacking the fire in the belly to gun for the presidency, for being a coward. But the best President in Kenya’s history was Mwai Kibaki, the coward who became President.

Mudavadi showed his fangs for the first time recently when he kicked out ANC Secretary General Godfrey Osotsi from the party. He is a man ready to do what needs to be done for the greater good.

He has already set the ball rolling, albeit slowly, for 2022.

Some Kenyans argue that there is no other option in 2022 apart from Ruto or Gideon Moi, the man who thinks he deserves to be President just because of his second name.

But what if we voted Mudavadi? Wouldn’t it be making a statement on the ballot?