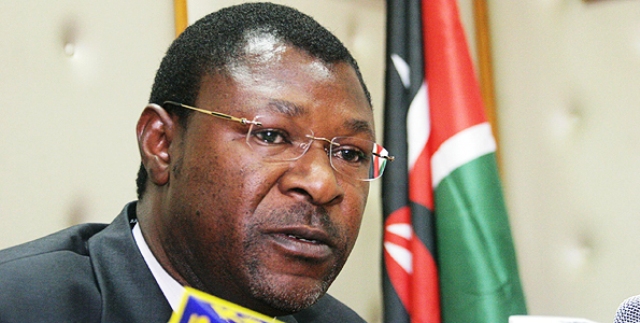 The Fake Gold Scandal continues to make headlines across various quarters in the Country even as the whole thing seems to have taken a nasty political twist.

Bungoma Senator Moses Wetangula has been at the center of this whole scam with a viral audio of a conversation between him and a Dubai based Gold trader only compounding his woes.

The FORD Kenya Party leader has been mocked and ridiculed across various Social Media platforms by a number of Kenyans who are angry with him for apparently soiling the name of the Country.

There were earlier reports that Wetangula might be arrested upon landing at the Airport from China where he was on an official 10-day trip for a preparatory international anti-corruption session.

Well, this did not happen as the Senator landed at the Airport and went to his residence a free man.

Wetangula is set to be a guest of the DCI detectives tomorrow. He is however yet to give a statement on the same even as a number of politicians from the Tanga Tanga keep calling for his arrest and that of Raila Odinga together with Interior CS Fred Matiang’i.

Attempts to get Wetangula finally make a statement on the Scam have since not bore any fruits.

Before he went to China, Wetang’ula admitted through his personal assistant to having been involved in the transaction but denied having conned the businessman. He said he also lost money in the deal.

At the same time, businessman Jared Otieno, who is facing charges of conspiracy to defraud Sh300 million through fake gold transactions, was yesterday released on a Sh1.5 million cash bail.

Milimani chief magistrate Francis Andayi also released Otieno’s 15 co-accused on separate bail terms. The accused were further ordered to deposit their passport with the court and report to the investigating officers once every two weeks.

Their case will be mentioned on June 10 while hearing was fixed for July 2.

Meanwhile, a man whose picture appeared on a poster claiming he was the fake CS Matiangi who participated on the gold scam presented himself to the DCI and denied the allegations.