2 Kg of marijuana (bhang) got intercepted by K9 units at JKIA last Friday 24th May 2019. The bhang was destined for London from Nakuru and was disguised as herbal soap.

A total of 20 boxes each weighing 100 grams were confiscated by the Kenya Revenue Authority officials.

2Kg of marijuana (bhang) intercepted by K9 units at JKIA last Friday 24th May 2019. The bhang was destined for London from Nakuru and was disguised as herbal soap. A total of 20 boxes each weighing 100 grams were confiscated by officials. pic.twitter.com/2tit1YS1D7

Incidents of seizure of bhang have been on the rise in the recent days. 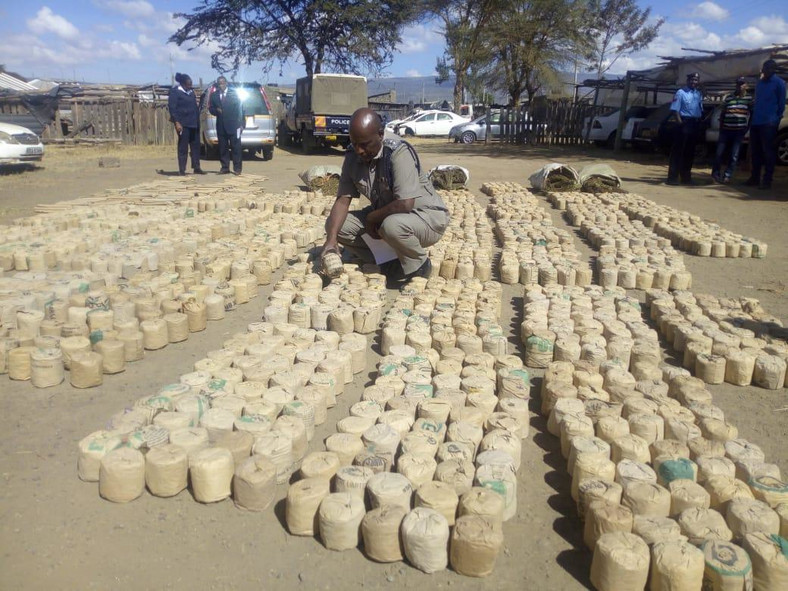 Police have failed to crack the question on who are the owners of the narcotics and the trail of money accrued from the illegal business.

Bhang trafficking remains one of the most lucrative businesses on the Kenya-Tanzania boundary.

Despite efforts to end the illegal trade, dealers are coming up with ingenious ways of ensuring the drug reaches their customers.Despite reports of police in Migori nabbing marijuana paddlers often hitting the headlines, the drug continues to find its way into Kenya.

Migori town makes news almost every week about marijuana trafficking. It is believed that the drug, worth hundreds of millions of shillings, is smuggled along the Isebania-Migori-Nairobi highway almost every day.

Investigation by media house reveals a well-orchestrated racket that allows bhang to easily cross into Kenya through porous border points in Migori County.

This is attributed to the fact that the drug is widely grown in Tanzania.

“Kenya is our main market. We do not sell any bhang in our country because it is available in plenty. A half an acre worth of bhang fetches between Sh 30,000 and Sh 60,000, depending on the quality,” said Martin, a Tanzanian bhang supplier.

Migori County Police Commander Joseph admits that fighting the smuggling of bhang into the country through the border has been a big challenge due to inadequate officers to man the border, as well as lack of cooperation from their counterparts in Tanzania.

“We know bhang is illegal in Tanzania, and we have tried several times to engage our counterparts to help us from their side, but they have been very reluctant and do not only do want to attend any meeting we invite them to,” he said.

Martin further claimed that there was no political goodwill in the fight against the drug, such that any time the police tighten the noose, politicians come out to criticise them for harassing other people.

“We have discovered a few loopholes and want to change the way we operate. We know Migori may not be the main market for the bhang, just the highway,” he said.

Bhang farmers at Ikoma and Kogaja villages claimed that they got into the trade after their stint in tobacco was messed by their government.

“We used to spend nine months in our farms growing tobacco, only to harvest and find no market. Bhang takes two to three months to mature and fetches more money compared to tobacco,” said Jacob.