Well, well, Just how smart is Kiambu Governor Ferdinand Waititu? From a far, he might look like some confused fella but in real sense, Waititu seems to be a man who has mastered his game and perfected his acts while at it.

The recent arrest of Waititu over alleged Massive Corruption in Kiambu County has once again made the Governor the talk of town.

Waititu was arrrested over irregular awards of tenders to his companies and those of close family members, Money Laundering and Conflict of Interests.

Detectives have already launched investigations into Waititu’s massive empire with eyebrows being risen over the Governor’s continuos accumulation of wealth ever since he became County Chief in 2017.

The Investigative officers were however left in shock when they realized that bank accounts operated by the outspoken governor have nearly nothing in deposits or savings. 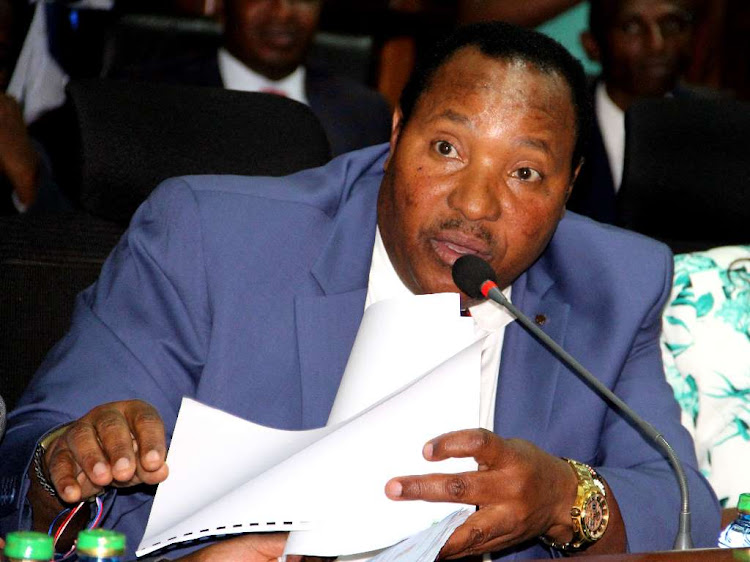 With this development, Detectives are now investigating whether he used proxies to buy the properties.

The empty bank accounts are a stark contrast to a man, who recently bragged about his massive wealth, that would make his critics shocked.

Responding to his detractors recently, Waititu said: “People should stop being jealous. When you hear someone has his own building, one should look for theirs. When someone is being elected for any seat, they are not poor; they have their own plans and I had mine”.

“My first building in Nairobi is now 20 years and if I took some of my critics to Nairobi, they would become insane if they knew the buildings I own. I only wear a simple shirt and move forward. I do not like to talk about wealth because it belongs to the owner, his wife and children”.

Yesterday, Waititu was grilled for hours about Sh588 million allegedly spent on dubious contracts following a dawn raid on his Runda and Garden Estate residences.

“EACC is investigating allegations of irregular award of tenders valued at Sh588 million to companies associated with Waititu and members of his immediate family,” EACC chief executive Twalib Mbarak said in a statement. “Preliminary investigations show that contractors paid monies to senior county officials, their companies or relatives through proxies,” the statement added.

The governor is also on the spot over alleged fraudulent acquisition of public funds, conflict of interest and money laundering. “During the searches, valuable evidence relevant to the investigations was recovered,” said EACC.

Detectives pounced on Waititu, hours after they had grilled his Murang’a counterpart, Mwangi wa Iria, over alleged irregularities and unexplained expenditure, coming against a backdrop of a heightened crackdown on corruption across the country.

In Murang’a, the commission is investigating allegations of corruption related to procurement improprieties involving purchase 34.5 acres of land in Mitubiri/ Wempa block 2/2575 for a marketing and value addition centre by Wa Iria.