There seems to be more to the man Zaheer Jhanda, whose name recently emerged in the fake gold scandal row.

Jhanda, who poses as an affluent ‘businessman’ is also found to have been embroiled in a Sh12 million car loan dispute with KCB bank.

A case in which he could not be traced because the court, despite issuing orders was not able to locate him.

KCB filed a case against Mr Jhanda and an accomplice in the car probe, the bank found that even though he identified as working in Nairobi, his physical address went unknown.

Attempts were made to find Mr Jhanda and his personal guarantor so that they could be given copies of the case documents but they could not be traced.

When contacted through a phone number he had given, the person who received the call claimed that he was not the one being sought after.

This forced the bank, on March 29, to plead with the court that there was no other means of reaching out to him other than an advertisement about the case in the newspaper.

Senior Principal Magistrate Grace Ayuma Mmasi heeded to their pleas and issued an order on April 18 that the matter be placed as an ad in the Daily Nation within 30 days.

Amid the court search came the fake gold scam, where Mr Jhanda supposedly came out to set a clear record.

Jhanda, who is the man said to have been the link between the Royal family in Dubai and the supposed gold sellers, said in an exclusive Citizen TV interview that the fake gold scandal is but a facade as the package in question is not even in Kenya.

“We are waiting for the gold to come from Congo so that we are able to export it to Dubai,” Jhanda told Citizen.

“I am not a conman I am a straight guy,” he added, “My role was not to establish whether the gold was genuine or not that is not my line of business.”

Jhanda was at the same time a political aspirant in 2013, eyeing the Nyaribari Chache parliamentary seat. He failed. 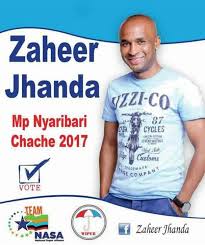