For the past few days, the Fake Gold scandal has been the topic of discussion across various social media platforms and gatherings.

This is a scandal that has once again put the Nation on the International Map as it involves the United Arab Emirates leadership who are the main victims and the Kenyan Government which is accused of having individuals who masterminded the conning of the UAE Top Government officials.

It has now emerged that Bungoma Senator and Ford Kenya Party Leader Moses Wetangula is the main man behind this bad business deal gone soar.

A Leaked Phone Conversation has put Wetangula at the center of this whole multi-million scandal.

This has all but confirmed the reasons as to why senior detectives have marked Wetangula as a Person of interest in the ongoing probe.

Meanwhile, Wetangula seems to have just implicated President Uhuru Kenyatta and his “brother” Raila Odinga in this whole saga.

The compromised media and #KOT are being partial with the truth here. You focus on Moses @Wetangulam alone when Wetangula has clearly IMPLICATED Uhuru Kenyatta, @RailaOdinga and @FredMatiangi as the masterminds of the fake gold scandal. Let us confront the 4 scoundrels. https://t.co/ZP5iKu1B7a

Wetangula used Uhuru and Raila’s name to assure a Dubai gold investor believed to be Ali Zandi that their detained consignment would be released.

According to Wetangula, he had already talked to Raila who reached out to Uhuru to help release the detained Gold.

“I am a hundred per cent sure there is no problem and tell Sheikh not to panic. We are finishing this matter and we will come and toast together,” Wetang’ula assured Zandi.

Zandi, the Dubai Gold Investor tell’s Wetangula that the Sheikh was growing frustrated since he was yet to get his consignment despite already paying players like Wetangula to facilitate the whole deal.

The Now Viral Audio Conversation also put’s Zaheer Jhanda, a man also at the center of this whole Gold Saga as the one who acted as Interior CS Fred Matiang’i.

It is unclear, however, how much money Wetang’ula allegedly received as he is overheard disputing in the audio an undisclosed figure sent to him. 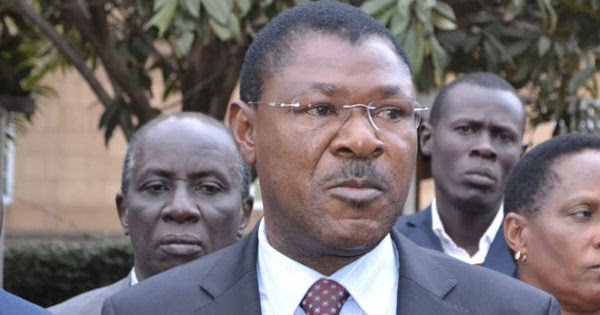 Well, it is however not clear how much money Wetangula pocketed from this whole deal as he tell’s the Dubail Gold Investor that they will have a sit down and discuss his share of the pay aince the amount of money they claim he got is not true.