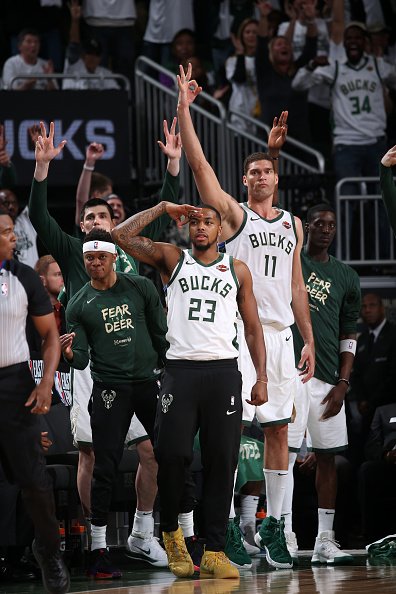 Lopez helped spark a run of 10 unanswered points in the final three minutes as the Bucks fought back from 100-98 down to claim a crucial victory in front of their home fans at the Fiserv Forum.

Brook Lopez scored 29 points as the Milwaukee Bucks staged a late rally to defeat the Toronto Raptors 108-100 in the opening game of their NBA Eastern Conference finals clash on Wednesday.

Lopez helped spark a run of 10 unanswered points in the final three minutes as the Bucks fought back from 100-98 down to claim a crucial victory in front of their home fans at the Fiserv Forum.

Two free throws from Kawhi Leonard had nudged Toronto into a 100-98 lead as the clock wound down on a pulsating opening installment of the best-of-seven series.

But a Lopez dunk gave the Bucks a 101-100 lead and then a three-pointer from the towering 31-year-old took Milwaukee four points clear.

Two free throws apiece from Eric Bledsoe and Khris Middleton completed the scoring as the Bucks pulled away to win.

“It was a complete team effort,” said Lopez, who finished with 11 rebounds and two assists. “We’d been playing with good energy the whole game but shots weren’t going down for us. So we knew we just had to keep grinding, which is what we’ve been doing all season long,” Lopez added.

The MVP stuffed the stat sheet in the Game 1 WIN:

“We’ve learned never to hang our heads, never give up, and we haven’t all season. They hit us, but we stuck with it and stuck together as a team.”

Lopez was backed by 24 points from Giannis Antetokounmpo, who also hauled down 14 rebounds with six assists.

Middleton had 11 points with 11 rebounds while Malcolm Brogdon delivered a vital 15 points from the bench.

"Definitely proud of this team. It was an ugly game, but we stood with it." #FearTheDeer | @hulu pic.twitter.com/Wkk8Ribvek

Bucks coach Mike Budenholzer praised the overall contribution of the team but singled out Lopez for special praise.

“Big game from Brook on both ends of the court,” Budenholzer said. “In the first half we were struggling but Brook was able to manufacture a couple of things.

“And several times in the fourth quarter he was out there making big-time plays – blocks, rebounds, contests. Certainly in a big moment, that was a great Brook Lopez tonight.”

The Raptors meanwhile will take positives from the form of Kawhi Leonard, who once again looked poised to single-handedly drag Toronto over the line.

Kawhi and all of the Raptors (except Kyle Lowry) went 0-15 FG in the 4th quarter of Game 1. pic.twitter.com/FWrI94q3NE

However Lowry was left ruing the Raptors inability to make a 13-point early lead count. Toronto also paid the price for being outscored 32-17 in the fourth quarter.

NOT IN GIANNIS’ HOUSE!#FearTheDeer 108#WeTheNorth 100

“Fourth quarter killed us,” Lowry said. “They outplayed us in that fourth quarter. They were a little bit more aggressive. Made some big shots, made some big plays. It sucks to lose like that. But we had our chance and we’ve got to learn from it.”

“When you’ve got a team down like that you’ve got to be mature enough and professional enough to try to keep them there,” Green said. “This is one win I thought we could have gotten. I felt like we kind of let it slip away.”

Game two in the series takes place on Friday as the Western Conference No. 3 Trailblazers visit No. 1 Golden State Warriors for Game 2 at 9:00pm/et on ESPN! (GSW leads 1-0).

"It was definitely good to see us win in a different way tonight." #FearTheDeer pic.twitter.com/G9XadEZODc