Consumers Federation of Kenya has projected the rise of public debt to about sh 7 trillion by 2022.

On the tweeter account, The federation was reacting to news that the Jubilee government has sold out $210 billion 3rd Euro board to surface the external loans due to mature on June 2019.

Kenyan treasury officials quietly flew out to Europe and the United States to drum up support for a new $2.5 billion Eurobond—the country’s third in five years.

MORE DEBT as Kenya nets Sh210 billion from a third Eurobond sale in less than 5 years. Funds meant to finance the Sh2.8 trillion FY 2019/20 budget and repay Sh75 billion bond due in June. The country's #PublicDebtKE is expected to hit Sh7 trillion by 2022 pic.twitter.com/KB4XKkEruU 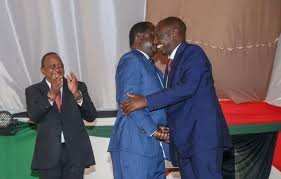 Reuters news agency reported that JP Morgan and Standard Chartered Bank have been appointed lead arrangers and that the Eurobond that will be listed on both the Irish and London stock exchanges.

Kenya is in dire need of cash to finance its budget and pay off maturing loans, including a $750 million Eurobond priced at 5.875 percent that is due for payment this June.

Kenya borrows Sh210 billion from international markets through the sale of the country's third Eurobond. pic.twitter.com/QZH5vAqO24

Public debt has risen to close to 60 percent of national output, up from below 40 percent in 2013, as Kenya has borrowed heavily from China to fund a $4.8bn railway scheme, the country’s largest infrastructure project since its independence from Britain in 1963.

#Eurobond at @NAssemblyKE are you really doing well inside there but you recently awarded yourselves house allowances so problem @Senate_KE you are still asleep…#FakeGoldQuestions #ThursdayThoughts pic.twitter.com/57P0HYW5Ik