A Cash-strapped Mount Kenya United could face far-reaching consequences should the team dish out one more walkover in the remaining Kenyan Premier League matches.

One more walkover against the relegation-threatened team, which has already dished out two walkovers in the league against Gor Mahia and Mathare United, could condemn it to life in the second-tier league with four matches left to the end of the season.

Gor Mahia earns a walkover after Mt Kenya fails to turn up for their #KPL game in Machakos. Mt Kenya players had early today staged a sit in at City Stadium over unpaid salaries. More than 10 clubs have not paid player salaries for several months #TheStateOfFootball pic.twitter.com/Cmg7oJYcNU

According to Kenyan Premier League Rule 2.4 on ‘Failure to Play Matches’, a team which forfeits three league matches in 12 months without a written explanation is liable to a cumulative fine of Sh1.5 million and immediate relegation from the top-flight league. A single walkover attracts a fine of Sh500,000.

On Sunday, Mount Kenya United failed to show up at Moi International Sports Center, Kasarani for their league match against Mathare United at Kasarani, necessitating a walkover. The ‘Slum Boys’ collected three points and two goals against the bottom-placed team without breaking a sweat.

The lads bounced back to winning ways courtesy of a walkover (2-0) awarded against Mount Kenya United who failed to show up at Kasarani Stadium on Sunday.

It was the third walkover in the league in a span of three weeks, the other two involving Mount Kenya United and Gor Mahia, and Nzoia Sugar and AFC Leopards last month.

Mount Kenya United players have not been paid salaries or allowances since the season began last December, and many of them feel hard done by the club owner whom they say is “unreachable”.

The other day it was @OfficialGMFC that got 3 points without sweating, courtesy of Mt. Kenya United. Today their shemejis @AFCLeopards have a walkover too, after @NzoiaFC failed to honor their tie at Bukhungu for quite ridiculous reasons. Kenya is indeed magical @RadioCitizenFM pic.twitter.com/5ysDc5nfoN

The owner, Francis Mureithi who unsuccessfully ran for Embakasi East parliamentary seat and who bought the club late last year from Nakumatt Holdings, has remained distant and inaccessible in spite of the deep financial crisis at the club. He did not respond to our request for comments.

Kenyan Premier League CEO Jack Oguda has now confirmed that the team will effectively be relegated and will pay a fine of not less than Sh1.5 million should it dish out another walkover before end of this season.

Oguda has also reiterated that club licensing regulations need to be reinforced in the league before start of next season to avoid similar situations.

“When they gave out the first walkover, we wrote to them asking for an explanation but we got no response. We have written to them again this morning asking them to explain their reasons for skipping the match (against Mathare on Sunday). If they miss one more match, they will face sanctions according to KPL constitution,” he said.

To earn a license, every top flight club is required to show proof of the availability of a steady income generating source that is exclusive of gate collection and the club owners’ personal finances.

Kenyan Premier League rules also indicate that apart from being relegated, and fined Sh1.5 million, a team that issues three walkovers in a span of 12 months will also be required to reimburse the actual or estimated loss of revenue in gate collection of their opponents.

Mt Kenya United chairman Bernad Mosomi chose not to comment on the issue, but some of his players who spoke on condition of anonymity said they would not honour any more matches this season.

“There is no club called Mount Kenya United. The club is dead. What kind of a team honours matches every weekend without any training at all during the week? 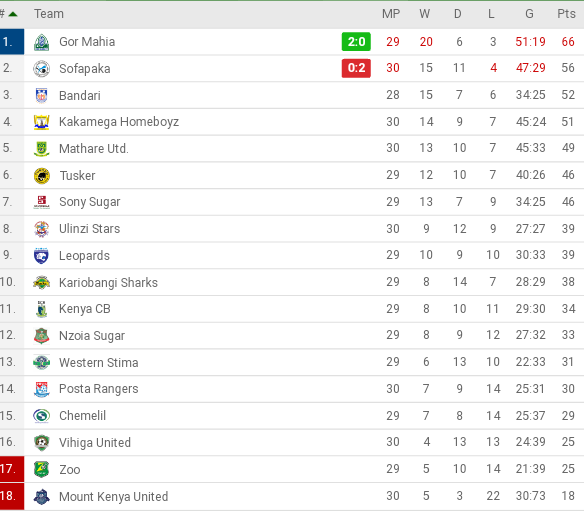 The owner of the club has deserted us, so it makes little sense to honour the remaining games because all of us will be dropped when the team is relegated next season anyway,” said one of the players.

The club is allegedly owned by Gatundu South Mp Moses Kuria after he initiated a process to rename the Sportpesa Premier  League side Thika United to Mt.Kenya United.