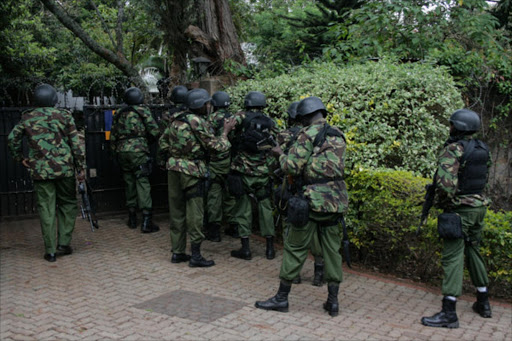 Furious sleuths drawn from the Directorate of Criminal Investigations Monday stormed one of the most closely-guarded homes in Kileleshwa and impounded property.

The sleuths acting on intelligence following widespread scandals involving gold in Kenya were met with zero resistance following their coordinated entrance into the home of a suspected gold scammer.

Last Thursday, a businessman suspected of defrauding a Dubai royal by pretending they could sell him gold was arrested by police at Lavington Mall.

The arrest comes days after DCI boss George Kinoti via his Twitter account urged embassies and High Commissions to advise their nationals coming in for business.

“The gold scam has now reached alarming levels as unsuspecting foreign nationals are being swindled large amounts of money by fraudsters,” he said.

In the Kileleshwa home raid, sleuths recovered some eight cars, gold bars and a host of other assorted property.

“DCI attention has been drawn to an upsurge in criminal cases involving the procurement and sale of gold the country. The Gold Scam has now reached alarming levels as unsuspecting foreign nationals are being swindled large amounts of money by the fraudsters,” DCI added.

Last week DCI nabbed some foreigners in Kilimani area who were suspected to be part of the fake gold scammers.