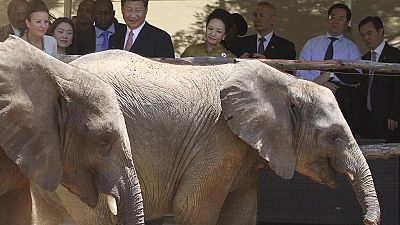 Zimbabwe has raked in Sh. 270M ($2.7M) for exporting baby elephants to China and the United Arab Emirates according to the Tourism Minister Priscah Mupfumira.

Mupfumira said across a period of six years, the country had exported 97 elephants to the two destinations where they were sold.

Sub-adults connotes that the exported animals were between two and three years old. A local publisher stated that the elephants were sold for prices ranging between $13,500 and $41,500.

Zimbabwe government says it earned $2.7 million from exporting 97 elephants to China and Dubai. Environment minister Priscah Mupfumira said they were airlifted between 2012 and 2018 and almost all were taken to zoos and wildlife parks in China. Bought for $13,500 to $41,500 each

The Minister stressed that the profit would go towards the conservation of elephants. “Zimbabwe’s carrying capacity is 55,000 elephants but now we have 85,000,” she said.

“We are sitting on ivory worth $300m which could be sold to fund our conservation programmes as well as benefit communities living in wildlife areas,” Ms Mupfumira added.

Zimbabwe had opted against the option of culling elephants as proposed by Cites, a group that works in the area of trading in endangered species.

Reports indicate that the quartet of nations are pushing for the lifting of elephant hunting and are backing a request for Cites to allow ivory stockpile sales to fund elephant conservation.