As part of normal protocol, the Reds have been forced to plan ahead with the Liverpool City Council for their potential celebrations.

The club are preparing to take to the streets on an open-top bus to parade the trophy.

Liverpool will only win the title if they beat Wolves and City drop points at Brighton.

They will also parade the streets if they beat Tottenham in the Champions League final.

Liverpool City Council are aware of plans that are in place for the parade to start around 4pm on Monday at Allerton Maze.

From there the bus will go north on the Queens Drive towards the Fiveways roundabout and Rocket Flyover. It will then go down Mill Bank, West Derby Road, Islington, Leeds Street, The Strand before coming to an end at Blundell Street.

Mayor of Liverpool Joe Anderson said: “If the Reds win one or two trophies, they will receive a well-deserved heroes’ welcome and we will put on a show to make the city proud.”

Despite being an Everton supporter, he is still able to recognise the level the Reds have performed at this season: “Anyone who is a football fan can’t help to have been impressed by Liverpool’s performance this season – whatever their allegiance.” 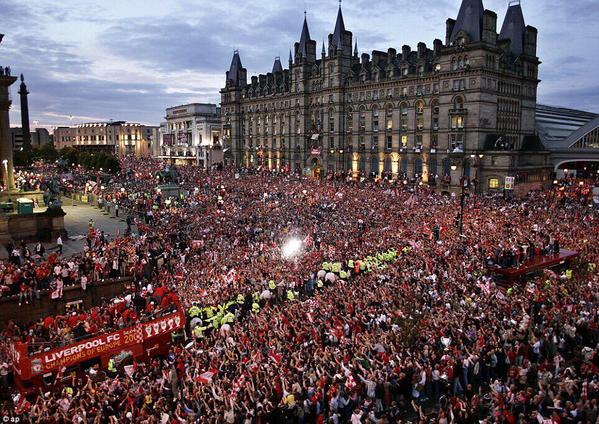 Fans have already been advised to take note of the potential route which is likely to cause carnage in the city centre, should it happen.

The last time the Liverpool squad paraded the city was back in 2005 after their historic Champions League comeback against AC Milan.

If they beat Tottenham in Madrid, the Champions League parade will take place just one day after the final when the players return from Spain.

There are two festivals going ahead that day in Liverpool, the Bordeaux Wine Festival and the River Festival.

The council have decided that these will start earlier to avoid further disruptions.

Before the final day of the Premier league season, Jurgen Klopp revealed his admiration for his title rivals Man City.

“Congratulations for an unbelievable season for sure, it is just impressive,” he told Sky Sports.