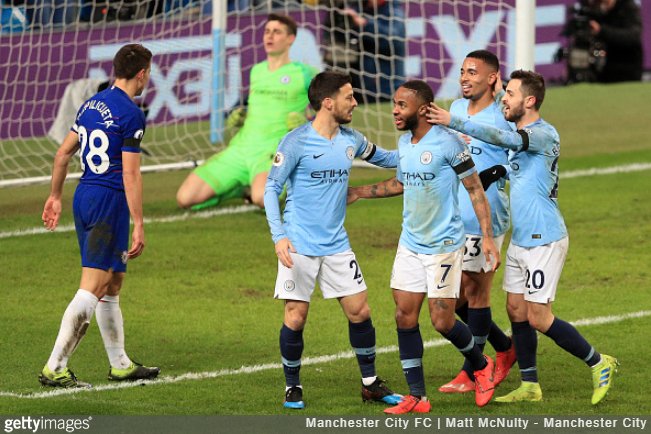 Pep Guardiola’s side returned to the summit of the Premier League by handing the Blues their worst defeat since 1991. In the wake of victory Manchester City played ‘One Step Beyond’ by Madness with the Etihad Stadium slowly emptying.

According to the Evening Standard senior City officials immediately ordered that the song be cut short upon realising the anthem is played at Stamford Bridge each time Maurizio Sarri’s side win.

The league leaders were keen to avoid any interpretation that they may have been gloating following what was already an embarrassing afternoon for the Blues.

Defeat for the west London side further piles the pressure on Sarri who has yet to pick up an away day point in 2019.

Manchester City have reportedly apologised to Chelsea after playing the Blues’ anthem “One Step Beyond” at full-time. pic.twitter.com/F1xCus6HHm

The Italian swiftly turned and headed down the tunnel seconds after the final whistle blew, bypassing Guardiola in the process.

The tension was eased as Chelsea’s assistant manager Gianfranco Zola embraced the City boss and the two shared a word before parting.

The result leaves Chelsea in sixth place having dropped below Arsenal due to the Gunners having scored more goals.

It was also a third defeat in their last four league games – and their only victory came at home against lowly Huddersfield.

Sarri is struggling to get his message across to his Chelsea players but his counterpart on Sunday has defended the difficulties of embedding a new philosophy.

Guardiola said: “People don’t understand how difficult the first year can be. People need time, it only depends on the owners, the people in charge need to believe.

“I came to Manchester City because the bosses, chairman and Txiki (Begiristain), he knows me.

“He doesn’t believe I’m bad when we lose and good when we win.”