President Yoweri Museveni has promoted his son to the rank of Lieutenant General, the second highest army rank in Uganda.

According to the list released by the UPDF on Friday, Muhoozi Kainerugaba was among more than 2,000 military officers who were promoted.

Lt-Gen Kainerugaba is Museveni’s first Son and moved up to the rank of Major General in 2016 and again promoted to the Special Presidential Advisor for Special Operations a year later.

The 44-year old Lieutenant was previously the head of the elite Special Forces Command, a unit in charge of the president’s security.

Maj-Gen Prossy Nalweyiso, the only woman in that rank was also promoted to Lt-Gen.

The Deputy Inspector General of Police Sabiiti Muzeyi moved up to Maj-Gen from Brigadier. 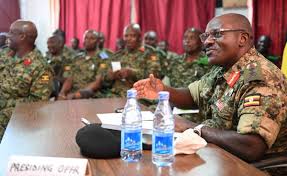 “The President and Commander-in-Chief of the Uganda Peoples’ Defence Forces has confirmed the promotions of 2,031 UPDF personnel to various ranks,” read the statement by the army.

The promotions have seen two officers become full Generals, 10 move up to Lt-Gen, 16 to Maj-Gen, and 35 to Brig. 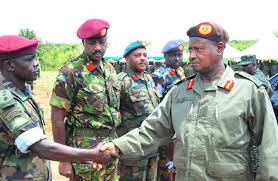 The preferment of Museveni’s son is likely to trigger debate on his succession plan with some observers saying Lt-Gen Kainerugaba could be a potential successor given his rapid rise through the army ranks since joining 20 years ago.

President Museveni is among the longest serving president in the world who took over power since 1986. He is however, largely expected to seek a sixth term in 2021.