Its crazy how despite all the criticism Kenyans and police officers were still eager for the new police uniform roll-out during the Kenya at 55 Jamhuri Day celebrations.

Whats even crazier is that the material used to make the new police uniform is unavailable, just three months after President Uhuru Kenyatta unveiled the new gear.

Yesterday, police chiefs were working extra hard to secure the fabric ahead of this week’s deadline for officers to wear the new Persian blue uniforms. 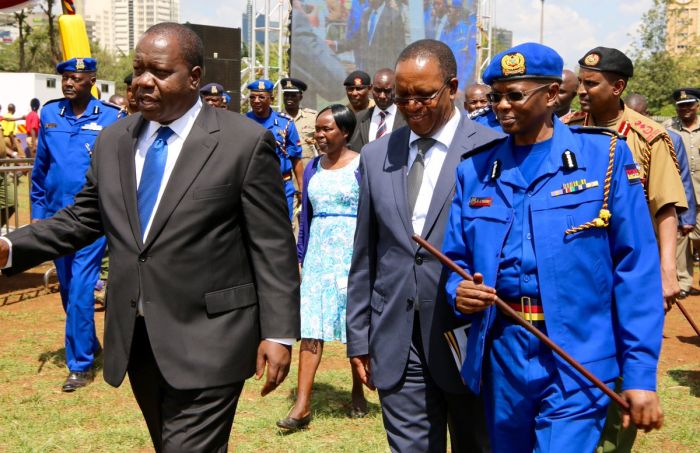 However, it emerged that the material was out of reach, even as security bosses visited various textile factories.The uniform crisis adds to simmering discontent over house allowances for police officers.

Some officers have reportedly vowed not to move out of Government houses at the end of the month, claiming their reduced pay is insufficient to rent decent houses.

Yesterday, Inspector General of Police Joseph Boinnet and Interior Permanent Secretary Karanja Kibicho were spotted at the Rivatex factory in Eldoret, where they had gone to look  for the fabric.

The Government team is also said to have scouted for the material at the Rivatex outlet in Nakuru County, several factories in Thika and another in Nairobi.

The spectacle of the top security officials touring the factories in search of the materials as the Government works to quickly roll out of the production lines for the new uniforms underlined the urgency with which the matter is being treated in Government.

It has emerged that there is a general shortage for that specific fabric. Reports indicated that the one used to make the few uniforms donned by top officials was imported.