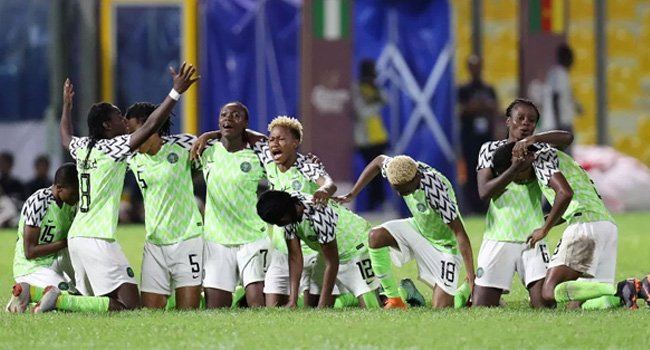 Women football on the continent have a new queen crowned as Nigeria’s Super Falcons have tonight defeated South Africa’s Banyana Banyana to win the Africa Women’s Cup of Nations Title.

The Super Falcons beat the South Africans 4-3 in penalties after both sides failed to score in regulation time. Tochukwu Oluehi, the Nigerian goalkeeper was the heroine diving to her right to save the penalty that would have cost the Falcons the championship title.

The Falcons were crowned champions in Accra, Ghana, where the final of the African Women Cup of Nations, AWCON took place. This victory makes it the ninth time Nigeria has won the Africa Women’s Cup of Nations title, consolidating their place as the most successful team in the tournament.

As at half-time, the two sides had failed to break the deadlock. Banyana Banyana, overcame Mali in the semi-final, putting two unanswered goals past their opponents.

The 2018 Africa Women Cup of Nations, officially known as the Total Women’s Africa Cup Of Nations, Ghana 2018 was the 11th edition of the Africa Women Cup of Nations or 13th edition if tournaments without hosts are included, the biennial international football championship organised by the Confederation of African Football (CAF) for the women’s national teams of Africa.

The tournament has been running from 17 November to 1 December 2018, when the winners were crowned. The tournament also doubles as the African qualifiers to the 2019 FIFA Women’s World Cup.