Every family has house rules that for love and respects sake members are expected to follow. For big houses like ODM the tension is greater when members disagree over who is breaking rules.

Joseph Nyambori and Festos Mapesa, who were recommended for expulsion alongside Migori Governor Okoth Obado, termed a report by the party’s disciplinary committee as baseless.

A section of the Orange Democratic Movement (ODM) members who are to be expelled now insist that they are here to stay.

They had been accused of gross misconduct and violation of the party rules.

The committee also stated that Governor Obado has continuously been disobedient, further accusing him of openly opposing the party in the recent Migori senatorial by-election by backing a rival candidate.

“He has embarrassed the party and the party leader… he has also been campaigning for another candidate outside of the party… we summoned him to come yet he ignored all sittings,” the committee chairperson Joseph Muniko said.

The final decision on the recommended expulsion lies in the hands of ODM’s national disciplinary committee.

Migori County ODM party Chairman Philip Makabongo added that the recent charges against the governor have also tainted the name of the party on whose ticket he was elected.

In 2016, Festos Mapesa was among six other ODM officials who were suspended over claims of working closely with politicians who were not members of the party. 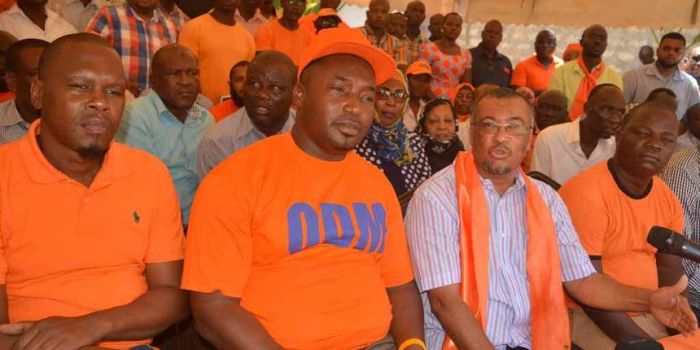 Philip Anguko, Festo Mapesa, William Nyakwaka, Tabitha Anyango, Alice Olale and Magret Ouko, are expected to appear before a disciplinary committee to respond to the allegations.

Led by Suna East sub-county ODM party secretary Daniel Opere, the party accused the six of violating the party constitution by working closely with politicians who are not in ODM party.

Echoing Opere’s sentiments, regional women’s leader, Beatrice Anyango said the purge will continue as the party wants to clean up house ahead of the 2017 polls.

The fellows are fighting to remain in ODM at a time when the party is intending to move to a new office that is reportedly worth 180 million. They revealed they were in the process of refurbishing and furnishing the new office.The occupation of the premise is now set to end on December 31, 2018, according to ODM’s executive director Oduor Ong’wen

Officials stated that the acquisition was part of the party’s re-branding strategy ahead of the 2022 General Election.

On Friday, the party told its supporters through a tweet to expect a renewed political outfit as “something good and new coming to you soon“.

Do you think those subject to expulsion will be allowed in the new office?