According to radio presenter Mike Njenga he was informed that Karuru who came to light after an assault video went viral lead to DCI announcing a search for him, has been arrested for rape allegations in a case that was supposed to be about foster parents.

The young man in despair has already spent a week in remand with no evidence for the case charged against him. This has infuriated KOT who have come out to attack the Kenyan judiciary for failure and disappointment. 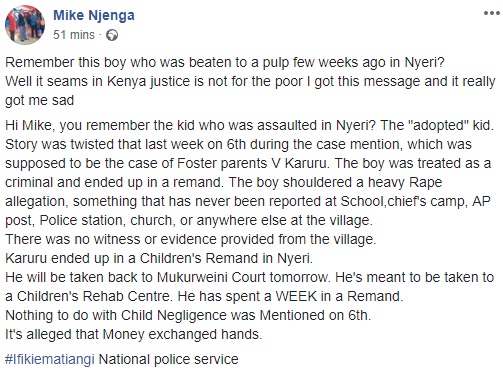 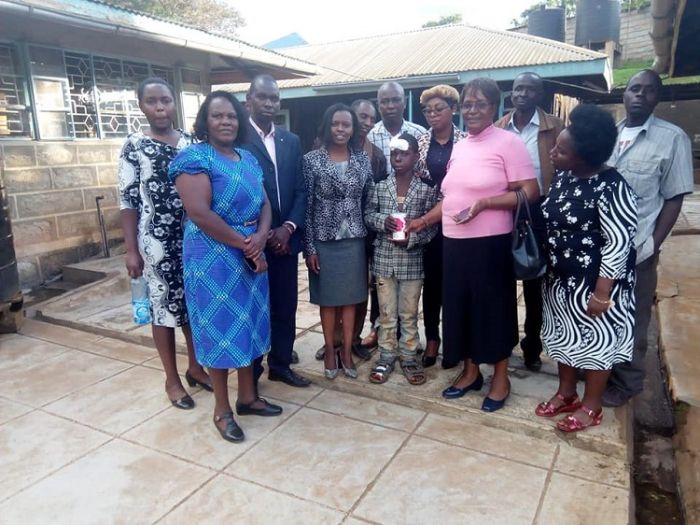 In the Court, The boy was charged with alleged rape in which there was no victim or a witness. Just hearsay! He was then Sent to Remand. At such a tender age, I beg to ask. How is a young boy like this capable of Rape! Is it because he is an Orphan? #JusticeForKaruru pic.twitter.com/u98GeZmZJ0

We have good laws. We have a great constitution. But in the case of Ishmael Karuru, the judiciary has failed. No matter how you cut it, we need justice for Karuru. #JusticeForKaruru pic.twitter.com/omzigp51WC

Multiple scars on his body tell of a painful experience and hardships that not many can relate to.The 13 years old felt abandoned and unwanted in his own home.

After the viral video,the Nation tracked him to his best friend’s home in Gikondi village in Mukurweini, Nyeri County, where he took refuge after being attacked and beaten up.

This Boy Karuru was accused of Raping an invisible being with Zero witnesses and was sent to Remand. The Judiciary and justice system in Kenya is dysfunctional! #JusticeForKaruru pic.twitter.com/fOkLOnV5wI

Apparently, the boy’s mistake was seeking shelter in the suspect’s grandmother’s house.His attacker was a 29-year-old man identified as Wachira Njambuya. 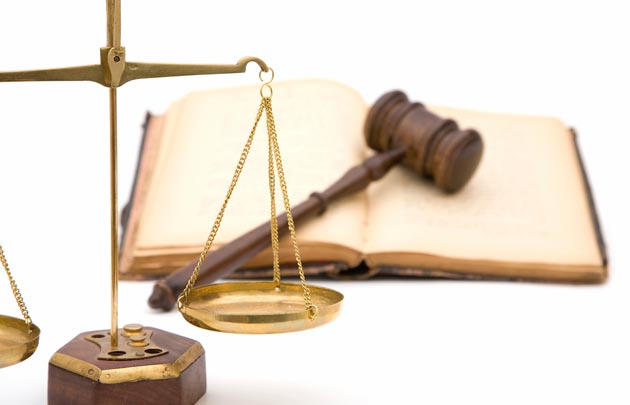 Mr Wachira allegedly went to his grandmother’s house on Saturday night demanding that boy leave immediately even though he had already gone to bed.

Hii kenya Tunaenda Wapi? Even the Judiciary has no mercy when it comes to kids! Money is all that they see! Karuru was sent to Remand based on baseless Rape accusations! #JusticeForKaruru pic.twitter.com/lJ19b7zOXz

It was not the first time he ran away from home he revealed that is was out of fear of being beaten or starved. He opted to sleep in the woods most of the time or to seek refuge at neighbour’s houses.

The teenager’s father reportedly runs businesses in Nairobi. He is rarely at home so the boy and his four siblings have been in the care of their stepmother.

The boy claimed that on multiple occasions, his stepmother kicked him out of the house and asked him not to return.

Where is the Department of`Children’s Affairs in Kenya, the lead Government agency that coordinates and supervises services and facilities designed to
advance the well being of children? #JusticeForKaruru pic.twitter.com/Qjp1IjhsOK

Someone also stated that a lady is offering to take care of the young boy who has gone through so much. Its also suggested that the person who assaulted him needs to be behind bars too.

There is a Lady who has offered to take care of Karuru because the boy is facing too much Oppression and has gone through a lot. He needs to be set free. He is an innocent man. In fact the person who assaulted him needs to be behind bars. #JusticeForKaruru pic.twitter.com/C9iha5q5l9

Children’s officer Peter Irungu said the boy would be placed in protective custody as investigations continue.

“I intend to place him in a safe environment because I understand the home is not safe for him. The allegations about his adoption cannot be confirmed but the father has been summoned to explain further,” Mr Irungu said.

Whats your take on the Kenyan judiciary over Kamburu’s story?