Imagine yourself getting bold enough to stand up to your president in disagreement.Very daring and scary at the same time because if you lose your job because head of state recommends you badly who would dare employ you?

A federal judge Friday ordered the White House to reinstate the press credentials of CNN reporter Jim Acosta, whose pass was revoked after a heated exchange with President Donald Trump, the network said.

Judge Timothy Kelly issued a temporary restraining order that requires the White House to restore Acosta’s access until a full hearing is held, according to the network.

CNN and other media groups, including Trump-endorsed Fox News, backed the lawsuit which claimed the revoking of Acosta’s pass violated constitutional guarantees of a free press.

CNN sued the White House over its move citing both America’s first amendment right protecting freedom of the press and the fifth amendment, which addresses the right to due process.

The judge found that taking the pass from Mr Acosta, the broadcaster’s chief White House correspondent, did amount to “irreparable harm” despite the White House saying other CNN reporters could attend briefings.

Judge Kelly said his ruling was based on “due process” the fifth amendment rather than about freedom of the press. “I want to be very clear that I have not determined that the First Amendment was violated,” he said.

Speaking outside the court room, Mr Acosta said: “I want to thank all of my colleagues in the press who supported us this week and I want to thank the judge for the decision he made today.  Let’s go back to work.”
A CNN spokesman said: “Today’s decision reaffirms that no one, not even the president, is above the law.”

Mr Trump has frequently lashed out at CNN’s coverage of his presidency, calling the broadcaster “fake news” and claiming it has an agenda against him. 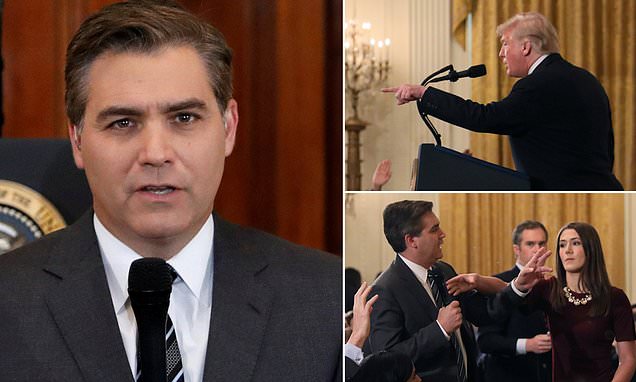 In particular, Mr Trump has clashed with Mr Acosta. The pair got into a particularly heated exchange in a press conference the day after the midterm elections earlier this month.

Mr Trump ordered Mr Acosta to put down the microphone after being repeatedly challenged over his immigration claims made before the vote. Mr Acosta’s White House pass was revoked shortly afterwards.

Sarah Sanders, the White House press secretary, later tweeted footage of the moment when an intern attempted to take the mic from Mr Acosta. The video zoomed in and repeated a moment when their arms appeared to come into contact.