“All the country’s main agricultural activities are riddled with problems. The time has come for radical changes. We need a national conference and strategy, and a new way of thinking in the agricultural sector,” said Mr Murkomen on Sunday. Mr Cheruiyot accused Kiunjuri of discrimination in how he handled farmers’ plight. 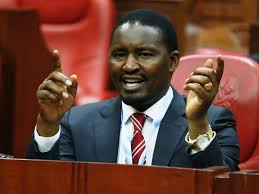 “Recently, the CS established a task force on coffee and took pilot projects to central Kenya and Meru region. He ignored Kipkelion West constituency despite it being a leading coffee production area,” said Cheruiyot. The senator also criticised the CS for establishing a task force on sugar and snubbing Kericho despite the fact that sugarcane farming thrives in Soin/Sigowet and Ainamoi constituency. “The CS doesn’t know how the country’s agricultural map looks like. The President must send him home. We will not allow Kericho and Rift Valley farmers to be discriminated against and left to appear as if we are just but cry babies,” he said.

Mr Koskei accused the CS of failing to pay South Rift maize farmers part of the Sh2.1 billion released by the Government recently. “Maize farmers in Kericho recently harvested their crop. At least Sh400 million is required at the Fort-Ternan, Kipkelion and Kedowa cereals and produce board depots for the purchase of at least Sh3,500 per bag of maize,” he said. Mr Murkomen said he would table a Bill in Parliament seeking to reverse the decision to amalgamate the Agriculture and Food Authority.