According to legendary Manchester United striker Andy Cole the Frenchman Martial initially struggled to get into the United side at the start of the season after a falling out with manager Jose Mourinho.

Martial failed to return to the pre-season tour to the USA after the birth of his child and his future at the club was in doubt.

But he has now started United’s last five games in all competitions and has repaid the faith shown by Mourinho.

Martial has scored five goals in his last four Premier League appearances for the Red Devils. And Cole says there was never any doubt over Martial’s ability but he just needed to get his “mojo” back.

“He’s been in and out [of the team] and I have watched him many times obviously being at Manchester United,” Cole told Sky Sports News.

“He has got all the ability in the world.

“However, confidence is massive in football and I think he has got his confidence back now. 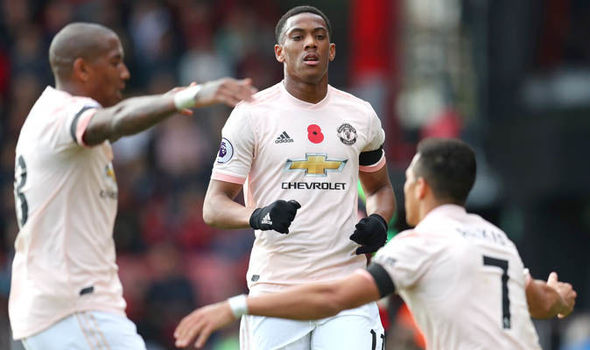 Marcus Rashford scored a stoppage-time winner for United in the 2-1 victory at Bournemouth last Saturday.

And Cole was pleased to see the 21-year-old on the scoresheet.

“Marcus, it was nice for him to get a goal at the weekend,” Cole continued.

“He got it in in the end after having a similar kind of chance when the kid cleared it off the line.

“So fair play to him and hopefully that gives him a bit of confidence as well.”