That is what Xherdan Shaqiri has revealed. The Reds extended their unbeaten Premier League start to nine games thanks to Mohamed Salah’s first-half strike at the John Smith’s Stadium.

But the Merseyside outfit were far from their best with Liverpool perhaps fortunate that a pair of contentious refereeing decisions went their way, a handball claim against James Milner and a marginal offside call going in the away side’s favour after Alex Pritchard found the back of the net.

Klopp was animated on the touch-line throughout Liverpool’s win as he let his frustrations show – and Shaqiri, who set up Salah’s winning goal, admits the German manager was just as vocal in the dressing room afterwards.

“Of course, he is very emotional,” Shaqiri said. ”He wants the best from you and always that you give 100 per-cent.

“If he sees something that is not 100 per-cent normal then he will shout – and he did! That’s normal. Everything was not perfect like he wanted it to be.

“In the end, we won the game and that was the most important thing. Of course, we have to analyse to see what was good and what was not good.

“But I’m really proud that we had another clean sheet. That’s very positive.” 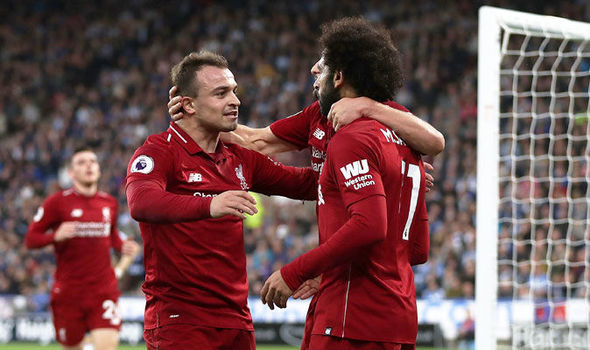 On what Liverpool might have done better, Shaqiri said: “We had a lot of opportunities to score more goals. Eight or 10 times when it came to making the final pass, we could have done better.

“Maybe we can do better offensively. But defensively, it’s always good for the team to go away with a clean sheet.

“Every defender was very good. Dejan [Lovren] and Joe [Gomez] were very good in the air. They had a big striker in there and they are good with long balls.

“I knew it was going to be a tough. Huddersfield are struggling at the moment, but I played here with Stoke and it’s a tough place to play.

“It was not the best football we have played, but we got three points and that was the most important thing. Top teams have to win games like this. You cannot always play good football.”

Klopp admitted to BT Sport afterwards that he even apologised to Huddersfield boss and good friend David Wagner because he felt his side were fortunate to take all three points.

“How can I explain the performance? For me, it looked like we could have scored in five, six, seven situations, with one better pass, especially after the 80th minute,” he told BT Sport.

“The last pass was so often today not good. I have to watch it again. Apart from that it was good, it was OK.

“A few players had problems. Milly [James Milner] came back then he felt something, we had to change, Hendo [Jordan Henderson] the same, Adam [Lallana played his] first game in a long time.

“Daniel is not yet used to 90 minutes, Gini [Wijnaldum] immediately got a knock in the Achilles, Shaqiri didn’t play much for us and then for Switzerland twice in 90 minutes.

“But mostly it was because Huddersfield did well. We had to fight and we did that well. When [me and Wagner] shook hands after the game I said ‘sorry’, because it felt like that.”