Melida Auma Otieno, mother to Sharon Otieno emotionally broke down as she eulogised her daughter during the burial of the slain Rongo University student. Auma together with her husband Douglas Otieno, braved a heavy downpour as she declared that she was even ready to die to ensure that her daughter’s killers were brought to book and justice prevails.

“Let me be the next victim after Sharon. I am ready to die if that will bring justice to Sharon. Let them kill me. Go in peace my baby girl. I can see you lying there. I know you are not dead but just asleep. Please keep an eye on those who killed you. Don’t allow them any peace, ” mourned Ms Auma.

Earlier on the funeral ceremony was disrupted and turned chaotic after Rongo University students stormed the area as they demanded for justice for their fallen colleague. 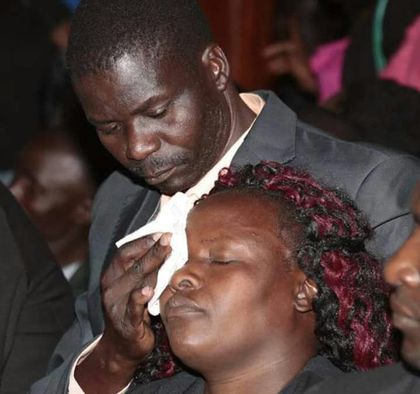 They cut short Homa Bay Town Member of Parliament Peter Kaluma’s speech as they surrounded Sharon’s casket while chanting ‘rest in peace’. The MP and family lawyer had to stop the program to allow the student to grieve their comrade. During the pre-burial ceremony, Sharon’s mother Melida Auma collapsed and fainted after she got overwhelmed by emotions, as her daughter’s body arrived at their homestead in Migori.