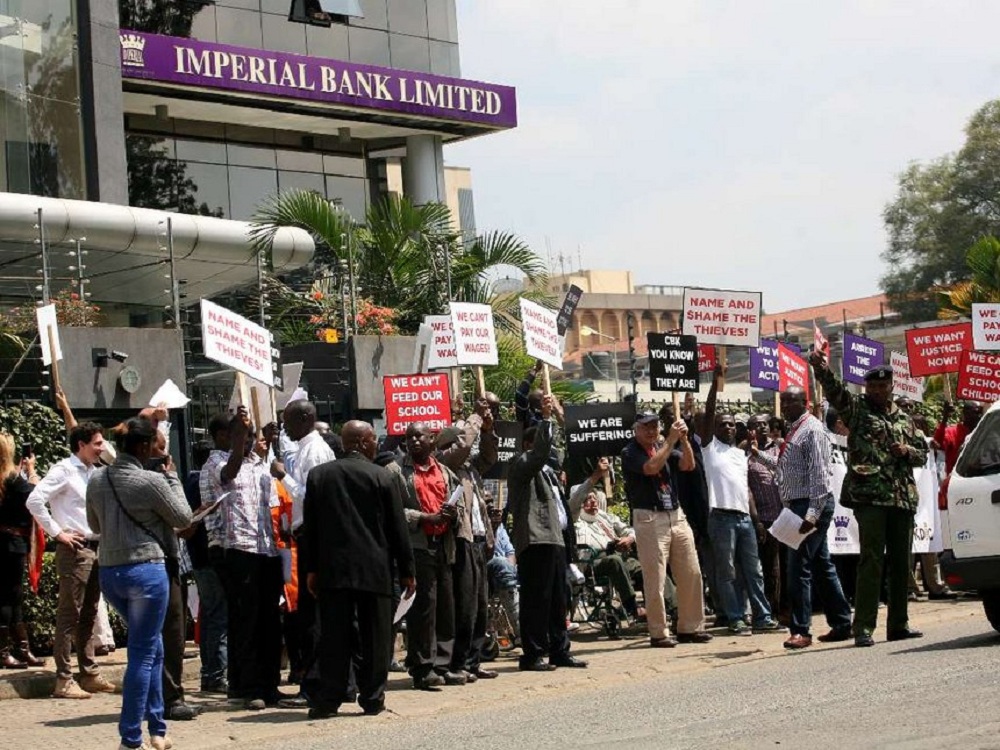 Depositors are now saying they are in the dark over ongoing discussions between the regulator and KCB Group over acquisition of Imperial Bank.

The silence occasioned by lack of information has reached a level where one of the depositors, Kenya Tea Development Agency (KTDA) has moved to court seeking access to information.

The tea agency, which has Sh2.9 billion in deposits at the collapsed lender, in a petition filed last month accused the Central Bank of Kenya of failing to disclose due diligence and steps taken to protect their interests and not giving updates on the financial position of the bank.

“Declining, refusing and or otherwise failing to disclose due diligence and steps taken to protect the plaintiff’s interest during the receivership period,” reads one of the issues identified by KTDA as breach by KDIC.

The agency wants the High Court to compel KDIC to give it access to information that would help it ascertain the true and current position of the bank. It further wants to be involved in ongoing discussions with KCB.

The tea agency further says the regulator has failed to ensure the discussions with KCB Bank or any other interested bidders are concluded timely to safeguard the interest of the depositors and other stakeholders.

KTDA lawyer Mwangi Kibicho told Smart Company that his client is not opposed to the ongoing negotiations but stressed that they want access to more information.

The High Court on September 26 allowed a request to extend Imperial Bank’s receivership until a case by the KTDA is determined.

The Central Bank of Kenya (CBK) in a statement on Thursday announcing the extension of receivership, noted that it would provide further details to stakeholders as soon as a binding offer by KCB Bank to acquire the lender’s assets has been fully assessed.

But KTDA in the documents filed in court says CBK has failed to give it any information on the financial position of Imperial Bank, which it argues is in breach of statutory duty. Imperial Bank was placed under receivership on October 13, 2015, after the CBK learnt of fraud, which milked the lender of Sh34 billion but the Information on the progress has remained scanty.

Mr Mahmoud Khambiye, head of a lobby group that represent Imperial Bank depositors, told Smart Company that CBK had left them in darkness regarding the progress being made, noting that they now depend on the press for any snippets of information.

“CBK has been very slow, too much time has passed and they have exceeded the timeline. As depositors, we need to be consulted and informed of the progress especially with the offer that is binding with KCB because we don’t want surprises, we want to know how much we are getting,” said Mr Khambiye.

The lobby group says CBK had indicated in past meetings that they will be considered for about 40 per cent of the deposit and any addition will depend on the offer from KCB.

The lobby group says while they support the ongoing discussion with KCB they should be considered for the best deal possible.

KCB Group had in the past revealed that it expects to finalise a takeover of Imperial Bank by the end of September.

But with the fresh extension of the receivership that is now tied to the KTDA suit that will be mentioned in January, the progress remains shaky and the regulator statement too leaving the stakeholders guessing, with no specific timeline.

The case, however, doesn’t stop the regulator from sealing any deal with KCB.