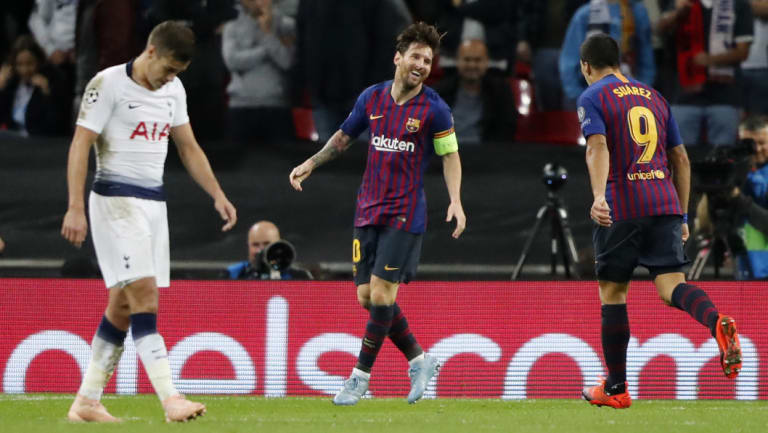 Spanish giants, Barcelona returned to form against Tottenham in the Champions League on Wednesday night, and Lionel Messi is reportedly very pleased with a key change in the line-up.

The Catalan giants have been struggling domestically over the past fortnight, going on a three-game winless streak after draws with Girona and Athletic Bilbao either side of a defeat to Leganes.

Ousmane Dembele was a regular starter in that run, although in the 21-year-old’s defence, he has scored five goals in nine appearances so far this season.

However, he was dropped to the bench against Tottenham at Wembley, with Arthur coming into midfield and Philippe Coutinho being shifted further up the field as part of the attacking trident.

It seemed to work for Barcelona as they secured a thrilling win, and it’s claimed that Messi is delighted with the switch to bring Arthur into midfield, a change he has been calling for for some time with Valverde finally giving it a chance.

In truth, it arguably does offer a better balance for Barcelona with Arthur helping Sergio Busquets and Ivan Rakitic to dictate the game in midfield while Coutinho can use his creative qualities alongside Messi and Luis Suarez in the final third to find openings.

Time will tell if it’s a system that Valverde will stick with now, but based on the report above, it certainly sounds as though Messi is in favour and doesn’t want the personnel to switch back.

That could in turn be a concern for Dembele as he’ll risk being left on the bench moving forward, but given his quality and the impact he has made so far this season, it will down to the Barcelona coach to find the right balance and rotate to get the most of his entire squad.