The decision to bury Sharon at her grandfather’s home is in line with Luo culture and tradition on the ground that the student’s ex-husband had not brought dowry to her parents’ home.

The woman, who was murdered together with her foetus, is scheduled to be buried on October 18.

Different communities have what others may consider “strange ways” of doing things. However, people from Nyanza seemingly have some of the most interesting and weirdest of customs and beliefs around.

For instance, ever heard that back in the day customs required widows in the community to sleep in the same room with their dead husbands before burial?

Well, reportedly, this was part of a cleansing ritual to purify such women in readiness for inheritance.

While at it, the widows were expected to experience an odd ‘mandatory dream’ of themselves making love to their dead husbands for one more last time, so as to be considered ‘freed’ and ready to get remarried. 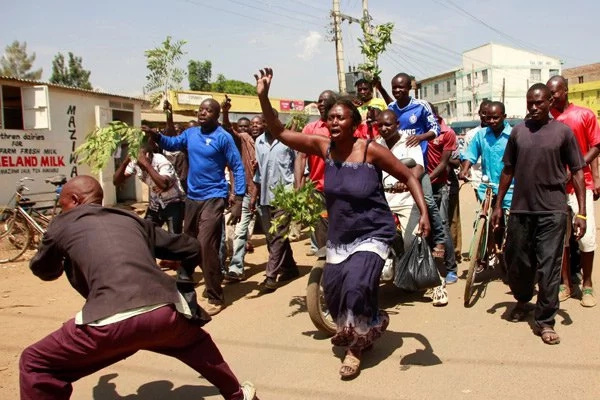 This is just an example of the weird and crazy cultures that used to be practiced in Luoland.

However, this, among other weird cultural practices, have since been done away with by locals due to modernisation and Christianity.

But because old habits die hard, some mild bits of these strange customs are still being practiced, especially in the interior parts of most rural outposts.

Speaking at his Magare home in Homa Bay County Tuesday before a visit by Rongo University lecturers, Mr Otieno said the decision to prepare for their daughter’s burial was informed by the belief that their daughter would get justice.

“We have seen suspects connected to her murder arraigned in court. We are happy with the investigations so far and believe her killers will pay for their crimes,” he said.

The family had vowed not to bury Ms Otieno until he killers are brought to book.

Her seventh-month-old foetus was buried three weeks ago.