A section of ODM party leaders have insisted that their leader Raila Odinga still remains the  the man to beat in the 2022 presidential election.

But despite Mr Odinga being against the 2022 presidential election debate, Mr Orengo said many leaders were already touring the country declaring their candidature or supporting their preferred candidates.

According to Mr Orengo while speaking at  a fundraiser for a church in Raliew in Rarieda, Siaya County, Every time I speak about this, I am taken as someone who is obsessed with Mr Odinga’s candidature. We want to raise the name of Raila high, and can only do that by speaking about him.”

Mr Orengo said for the changes in the country to be implemented, the country needs a leader who is pro-reforms.

In addition he said , “We want Kenyans to come out and support him because he is not only known nationally, but internationally too. He is way ahead of these other candidates for presidency.”

Mr Orengo said the constitution needs to be reviewed to improve areas that were not perfected before it was promulgated.

“We must review the constitution to correct all the political issues we have,” he added.

Mr Amollo said whoever is working with Mr Ruto hoping that they will be president and Mr Ruto their running mate is dreaming.

He was referring to Ford Kenya leaders Moses Wetangula and Boni Khalwale who, he said, were working with the DP hoping that they will form a coalition.

“Anyone who goes to Ruto should forget about being President. Wetang’ula and Khalwale know that very well,” Mr Amollo said.

He also pointed out that the constitution speaks of the presidency, which comprises the President and his deputy.

“We have a collective presidency under the constitution. Ruto and Uhuru have served their term jointly and therefore the Deputy President must retire with Mr Kenyatta.” 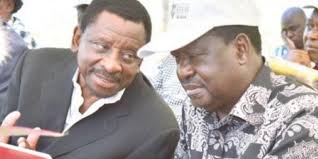 Embakasi East MP Babu Owino said Mr Odinga will contest in the 2022 polls and will win by whichever means.

“This time round we will achieve what we have been fighting for. We will get proper development only if we have better leadership from the top,” said Mr Owino.

However a clause in the 2017 Nasa power-sharing agreement gives opposition leader Raila Odinga a free hand to run for president again in 2022 if the pact is not renewed.

If he runs, the 2022 stab at the presidency will be Mr Odinga’s fifth attempt at the top job in an illustrious career that spans almost three decades.