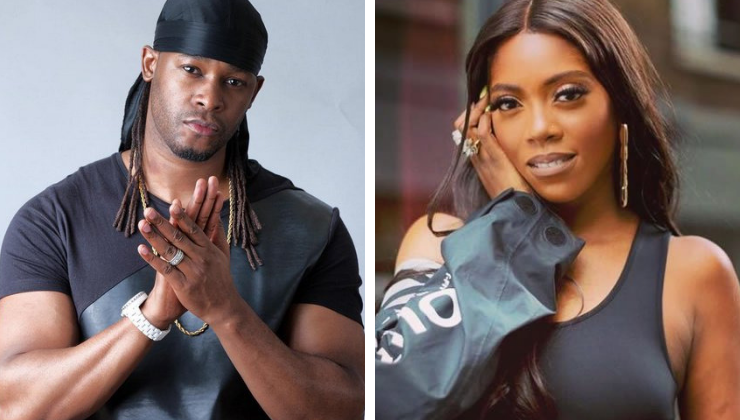 On Monday, Tiwa Savage took to Twitter to gripe about crooked promoters that left her stranded at a Nairobi Hotel over unpaid bills and without a ride to the airport.

This was after a successful concert at Carnivore, Redsan’s ‘Baddest’ Album launch.

The singer said that the promoters treat you like a hot cake before the concert but after the concert, they turn their phones off leaving you in a pickle.

“Checking out of the hotel and full accommodation not paid for, no car to take us to the airport and promoters want to talk trash about artists… Funny how everyone is asleep and phones are off after the show but they blow up your phone when they need you for radio and press runs before the show, ” tweeted a frustrated Tiwa Savage

After Tiwa’s Twitter messages, fans took to Redsan’s IG page to question him over the embarrassing situation.

Redsan has now responded to all the claims doing rounds on social media.

“Please stop trying to drag our good names in mud, GOD has already cleaned us. What more could you do? To our media houses, I wanna say thank you; for not jumping to conclusions, for being patient and mostly for coming out in large numbers to support my album launch. Thank you for being present as we made history on Saturday,” Part of his post read.

“I wanna thank all my fans who came out and all my fans around the world. @TiwaSavage and I couldn’t be tighter, she came personally for my gig and did an amazing show including my bro @DemarcoDaDon so for the haters out there wishing it’s me in the middle of all this guess what? Your bullets missed once again. And for the vulture promoters who always come between artists your time is up. We will expose you this has become a norm in Kenya WHERE vultures wait for you to go through the expenses and the sacrifices of bringing good musicians to our country and then they show up last minute to steal the prize. Don’t wait for an artist to show up in Kenya then you show up with your dollars. You are the guys killing this industry and messing us up. I want to thank my sponsors and all my colleagues in the music industry for coming out last weekend to support me. You guys are awesome and thank you for your big hearts let ’s keep the flag flying and the spirit alive. GOD BLESS. #VULTUREPROMOTERSOUTTORUINTHEINDUSTRY #king #baddest #thebaddest #myfans”