Petr Cech has been an ever present for Arsenal this season. Petr Cech admits he is playing for his future at Arsenal and says the goalkeeping situation is “complicated”. The 36-year-old, who has started all Arsenal’s Premier League games this season, has yet to be offered a contract extension with less than 12 months remaining on his current deal.

The Gunners signed Bayer Leverkusen ‘keeper Bernd Leno for £19.2m in the summer and Cech accepts competition for places is stiff.

“I’m in the last year of the contract so I guess it depends on my performances, the way I play and the way I stay fit throughout the season, then we’ll see what happens next,” he said ahead of Arsenal’s Europa League game against Vorskla Poltava on Thursday. 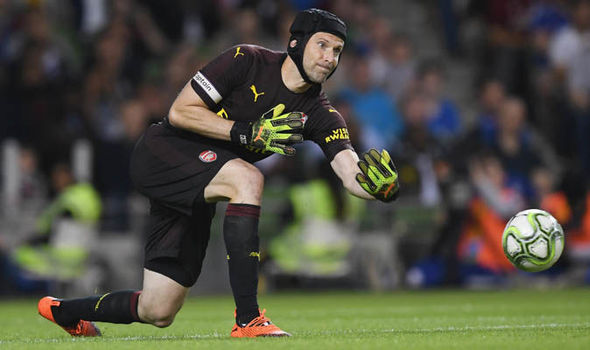 “When you bring players in you do that to improve the squad and to make it competitive and Bernd is here, trains every day and tries to get his spot which keeps everyone in the goalkeeping group on their toes including me.

“I have to work hard not only to make sure the manager picks me for the weekend but as well that he sticks with me.

“The goalkeeper situation is complicated as only one can play so the competition is bigger.

“At the moment I’ve been playing and I try to do my best and hope the manager is happy with my performances.